70-year-old female with a history of coronary artery disease, and hypertension presents by ambulance to your emergency department, the morning after Thanksgiving, with progressive shortness of breath. She notes that she has had company all week and as a result she didn’t seek medical care. She has noticed shortness of breath at night and has been resting on at least two pillows. Last night she was unable to sleep and had to stay in her recliner chair until she called the paramedics this morning. She denies chest pain now or at any time this week.  She admits that she failed to follow her low salt diet and states she may have missed some of her medications this week due to the holiday.

Upon finishing this module, the student will be able to:

Congestive Heart Failure (CHF) is one of the most common illnesses treated in the Emergency Department. It affects about 2% of the US population or roughly 4.8 million Americans. In patients over the age of 65, it comprises 20% of hospitalizations, making it the most common admitting diagnosis.

CHF arises when the ventricles fail to maintain forward blood circulation, often when the cardiac demand increases. Precipitating events include cardiac ischemia, dysrhythmias, infection, PE, physical/emotional stress, noncompliance with medication/diet, and volume overload. In this condition, the heart lacks the reserve to compensate for the increased burden within the congested circulatory system.

Class I – Ordinary activity not limited by symptoms

Class IV – Symptoms at rest or with any physical activity

Similar to other patients in the Emergecny Department initial actions include establishing IV access,provding supplimental O2 as needed, and vital sign monitor. These patients may require ECG and CXR

If 100% O2 by non-rebreather fails to increase O2 saturation to at least 95%, noninvasive oxygenation/ventilation (NIPPV) such as CPAP or BiPAP may assist in correcting hypoxia. If there is a failure to improve oxygenation, if the patient cannot tolerate the mask, or has a decline in mental status such that they are unable to protect their airway, then endotracheal intubation is required. The use of NIPPV used early can improve work of breathing as well as oxygenation, however caution should be taken as increased intra-thoracic pressure can reduce preload and worsen hypotension.

Hypotension can be difficult to manage in this patient population secondary to existing fluid overload. Early vasopressor support may be needed. Frequently patients with CHF exacerbation with present with significant hypertension. Nitroglycerin can be a useful medication in helping to reduce preload and reduce progression of pulmonary edema.

Typical chief complaints, as in this case, include shortness of breath and peripheral edema.

Your patient is in moderate respiratory distress, sitting forward, and speaking in only three word sentences.

HEENT: She has no stridor. Jugular venous pressure is elevated to the mandible. (Image 1)

Chest: Her lung sounds are crackles in all lung fields without wheezing.

Cardio: She has normal S1and S2. An S3 is present. There is no murmur.

Abdomen: She has no tenderness, no hepato-splenomegaly, and no masses on exam.

Extremities: She has two plus pitting edema to the level of the tibial plateau. (Image 2)

Neuro: She is awake with no weakness, numbness, speech or vision deficits.

Skin: She is pale with central cyanosis, cool to touch, and diaphoretic. 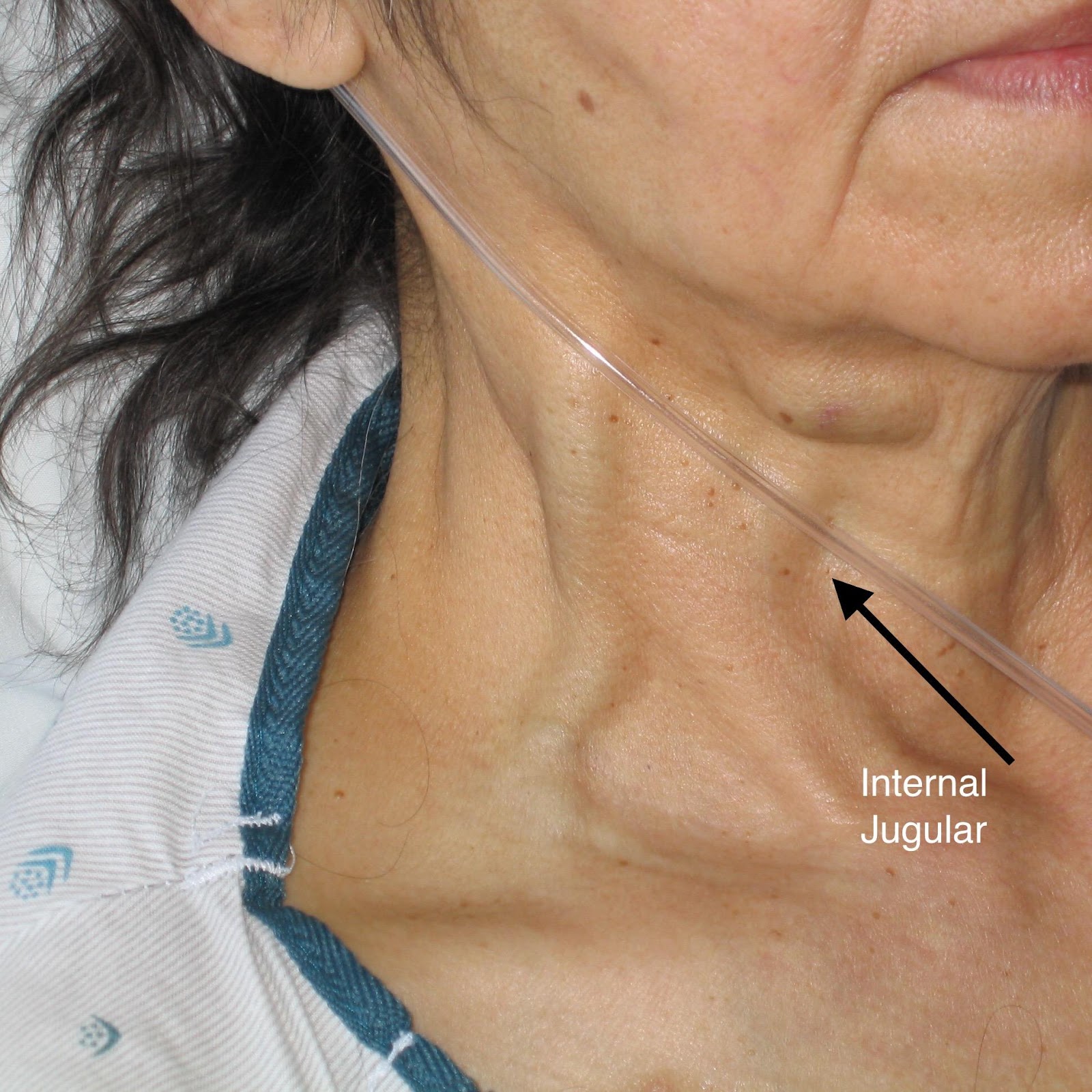 Image 1: JVD is measured by the peak of the pressure wave in the internal jugular vein. You can see this vessel is dilated as it exits medially from under the sternocleidomastoid. See black arrow. 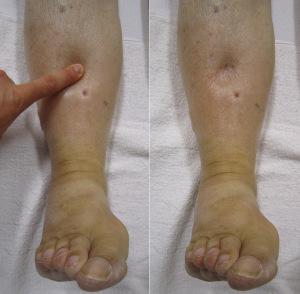 For your patient, your attending physician shows you multiple bilateral lung views, and parasternal long axis (PSL) and apical four chamber (a4C) cardiac views, and explains their significance in making a diagnosis of CHF. (Image 3-6). 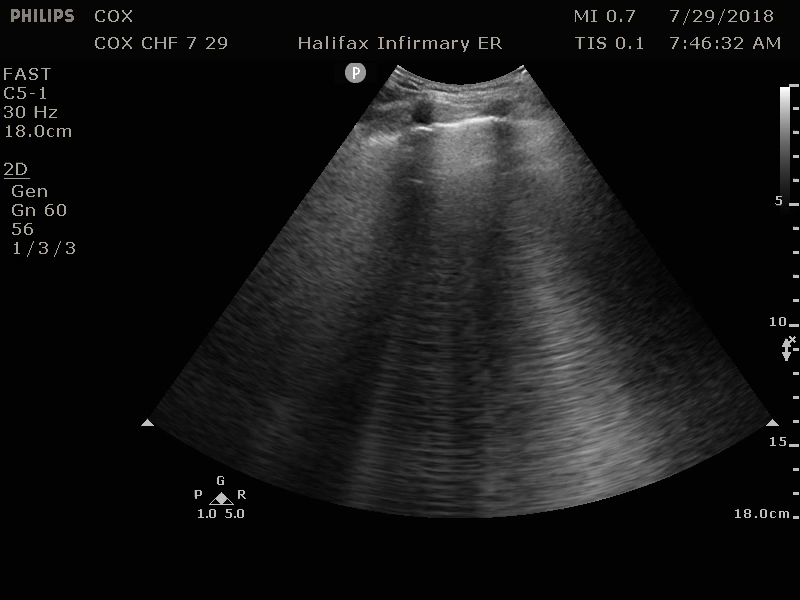 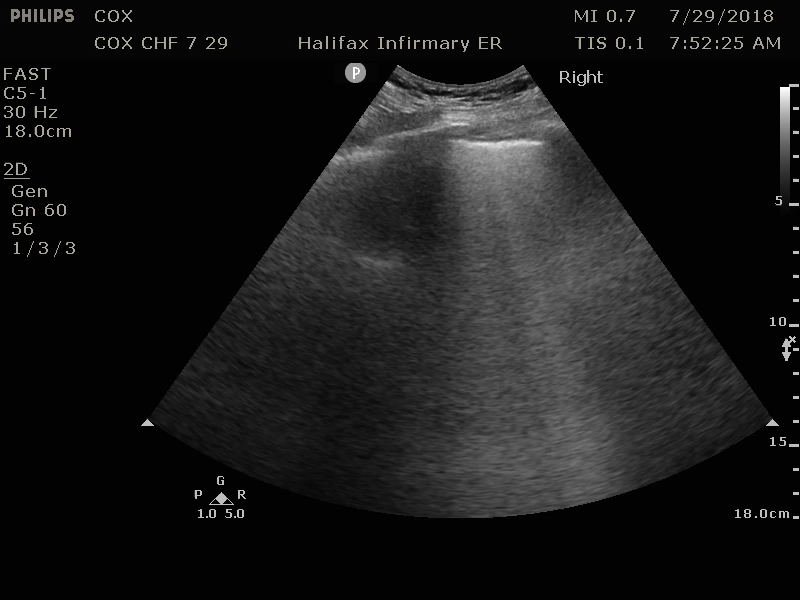 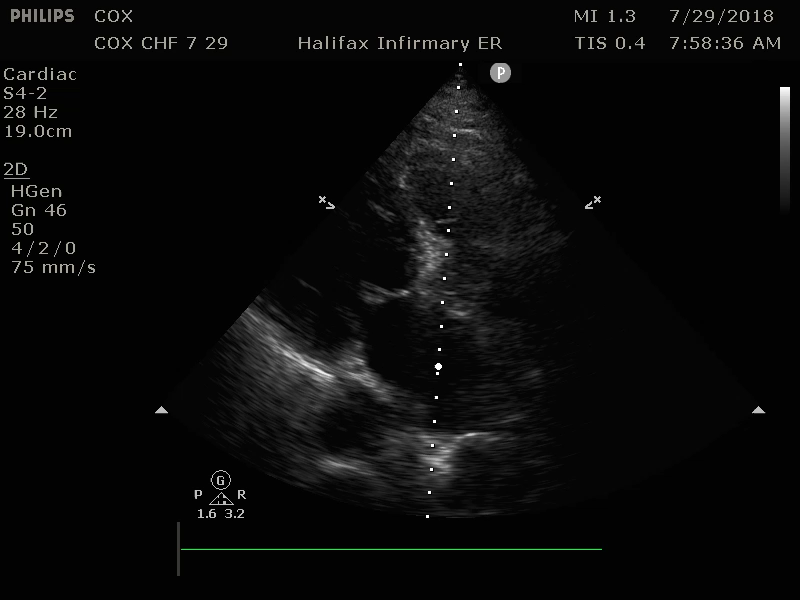 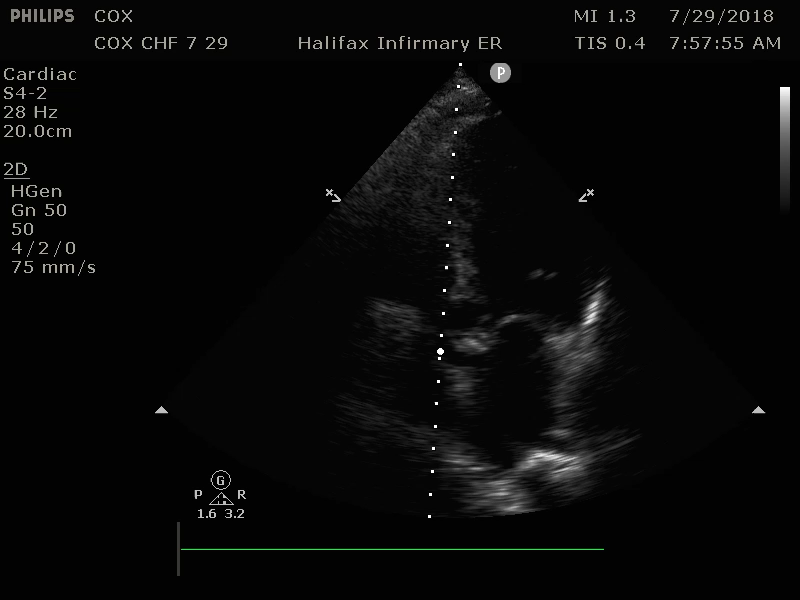 Your attending states that your patient has qualitatively diminished heart function and bilateral interstitial edema. As demonstrated at the bedside, she has B-lines in greater that 2 thoracic quadrants bilaterally which suggests a cardiac source of pulmonary edema. (Sensitivity 97%, Specificity 95%)

Common findings are cardiomegaly and effusions. Chest x-ray (CXR) findings may lag by 12 hours from onset of symptoms, and subsequently CXR findings may persist for several days despite clinical improvement. 1 out of 5 patients admitted for CHF exacerbations showed lack of any pulmonary congestion on CXR.

Cardiomegaly is defined as a cardiothoracic ratio greater than 50% diameter. Patients with diastolic failure may have normal heart size. 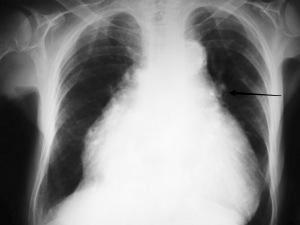 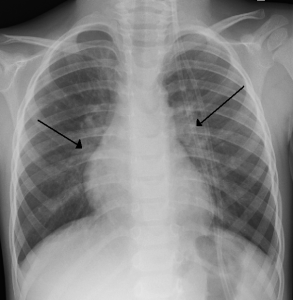 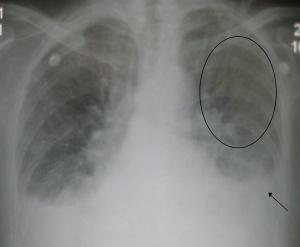 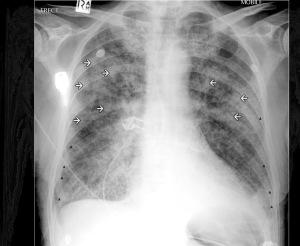 The Breathing Not Properly study found BNP (brain natriuretic protein) to be 90% sensitive and 76% specific for the diagnosis of CHF. Release is stimulated by high ventricular filling pressures. It has a diuretic effect, and antihypertensive effect, by increasing the amount of sodium excreted in the urine.

BNP levels may be most useful in tracking acute disease severity when compared to previously known levels. BNP levels may not always correlate with suspicion for CHF exacerbation, however, and clinical judgment should be used to further evaluate these patients.

Normal ejection fraction is 55-75%. Patients with severe CHF may have EF less than 20%. Echocardiogram can also be used to visualize ventricular size and any wall abnormalities or valvular pathology, pericardial thickening, tamponade or constrictive pericarditis as additional contributors to CHF.

In addition to initial actions noted above, treatment depends upon clinical presentation.

Normotensive patients: First give rapid acting nitrates to vasodilate and reduce afterload. These may be given sublingual, IV, or transdermal as nitroglycerin tabs/spray, push/gtt, paste/patch respectively. IV Morphine can be given for chest pain and anxiety, and may increase vasodilation. IV diuretics, such as furosemide, can increase urine output, lessening fluid overload, and may also contribute to vasodilatory effects.

Hypotensive patients: Avoid nitrates, furosemide, and morphine, as they will drop the blood pressure. BiPAP may have similar adverse effect due to decreased preload as intra-thoracic pressure rises. Increased myocardial contractility with norepinephrine, dopamine, dobutamine, amrinone or milrinone may improve vital sign parameters so that some of the other therapies may be used.

Severe or Chronic low output CHF:  Patients may be on ACE inhibitors or ARB to increase hemodynamic stability and exercise capability. If blood pressure allows, consider continuing this medication. If not already on ACEi or ARB, evidence does not support use in acute exacerbations.

MADIT II trial showed that patients with history of MI and EF <30% had a 29% reduction in mortality after AICD placement.

Patients may receive an LVAD as a temporizing measure until a heart transplant can be performed, or as a definitive treatment alone, if not a transplant candidate. The REMATCH study showed that patients had increased quality of life and had a 52% rate of survival at one year, compared to 25% for medical management only.

Heart transplant is the only long-term definitive treatment for congestive heart failure. Patients who receive a heart transplant have a 10-year survival rate of 50%.

Your patient was started on BiPAP, received three nitro sprays sublingually, and a nitroglycerin drip was started at 4ug/min IV and was titrated to a systolic blood pressure of 130 mm Hg. She received furosemide 40mg IV and the nurses documented a diuresis of 1500 ml of urine in the next two hours. Her troponin I was normal range, as was her CBC, and CHEM 7. Her BNP was elevated to 1020 pg/ml.  She was monitored on a cardiac monitor until she was transferred to the hospital cardiac step down unit where she was weaned off of BiPAP, transitioned to oral furosemide, had her low salt diet reinstated, and was transferred to a general floor bed. She was discharged on hospital day 4 on furosemide, an ACE inhibitor, a low salt diet, and outpatient follow up with her primary care provider in one week.