Unlike adult cardiac arrest, which is primarily caused by coronary artery disease, the most common causes of pediatric cardiac arrest are respiratory failure and shock. Timely recognition and management of these disease processes are essential goals of pediatric resuscitation.

Back to Our Case – What’s your first step in managing this patient?

Obtain a quick general global assessment using the pediatric assessment tool (PAT). Important information can be gathered by the patient’s level of activity, muscle tone, and appearance. Often you are able to glean this information within seconds of entering the room.

Your systematic approach to pediatric assessment needs to be completed in conjunction with effective respiratory management.

Ask yourself the following questions:

If the child is not breathing or gasping but has a pulse provide rescue breathing – 1 breath every 3-5 seconds, or about 12-20 breaths/min

If a pulse is absent or < 60 beats per min, begin CPR, attach monitor/defibrillator, obtain IV or IO access.

In children, carotid or femoral arteries are the most reliable methods to assess a pulse. In infants, brachial artery palpation is preferred. If no adequate pulse is detected within 10 seconds, CPR should be immediately initiated.

The preferred method for chest compressions in infants is to use both hands, encircling the chest with both thumbs, providing compressions on the lower sternum. The alternative technique is using two fingers from one hand to provide compressions.

Both of these techniques are shown below: 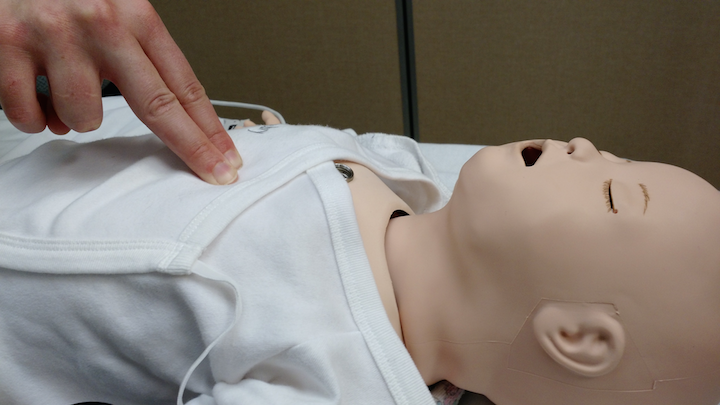 Venous access in children can be difficult. IO insertion is indicated if peripheral access cannot be obtained and emergent vascular access is needed. Most commonly the anterior/medial proximal tibia is used for cannulation. IO access provides a means of administering emergent medications, fluids, and obtaining blood. Traditional needles are inserted manually, but battery powered needle insertion devices are becoming more popular including use of the popular EZ-IO device.
To place an IO follow the directions below:

PALS algorithms are performed in conjunction with the primary and secondary surveys.

The secondary survey for the 2 week old is outlined below:

Based on your global assessment this child is critically ill and needs immediate intervention. You call
for help, immediately start high quality CPR, and put her on the cardiac monitor. You notice the following rhythm:

You recognize this as a brady-asystole pattern and in addition to high quality CPR and ventilatory support you recall the need for epinephrine.

What is the correct dose of epinephrine? Administering the proper dosage of medications in pediatrics requires the patient’s weight. However, in emergency situations there is often not enough time to weigh the patient. PALS supports the use of the Broselow pediatric emergency tape to reduce errors involved in calculating correct dosages. The tape displays emergency resuscitation medication dosages based on a child’s length. It is easy and quick to use.

Below is a picture of the Broselow tape:

The dose of epinephrine is .01 mg/kg or 0.1 ml/kg of the 1:10,000 concentration given IV/IO, repeated every 3-5 minutes. If the initial dose is not effective, additional doses should be given at the same dose. High-dose epinephrine does not increase survival.

In situations where IV or IO access is not available, epinephrine 1:1,000 can be given via the endotracheal tube. The dose is 0.1mg/kg or 0.1ml/kg. A normal saline flush is instilled after the epinephrine.

After one round of epinephrine your patient regains pulses and you are able to secure a definitive airway.

While of limited value in the initial phases of cardiac resuscitation, the following labs may be useful later to help determine the etiology of the arrest: CBC, CMP, lactic acid, UA. Consider an arterial or venous blood gas to assess for acid/base status as well as a toxicology panel if clinical concern exists. Consider an ammonia level to look for any toxins or inborn errors of metabolism. A chest radiograph is useful to screen for congenital heart defects and to confirm correct endotracheal position.

Chest radiograph is without any cardiomegaly or vascular congestion to suggest a congenital heart disorder. Labs show low bicarbonate but otherwise no severe electrolyte abnormalities. Urine analysis showed no evidence of infection. Toxicology panel is normal. No clinical or historical evidence to suggest traumatic injury. You remember neonates are prone to serious bacterial infections. This patient’s mother tested positive for group B strep but never received proper prophylactic antibiotic treatment. With a high suspicion for sepsis you initiate fluid resuscitation, and start broad spectrum antibiotics. You also successfully perform a lumbar puncture, obtain blood cultures, and admit the patient to the pediatric intensive care unit.