A 25 year-old female presents to the ED with a chief complaint of RLQ abdominal pain. She tells the triage nurse that she has had intermittent episodes of the pain but over the past 45 minutes the pain has become unbearable and excruciating. She complains of persistent nausea and multiple episodes of vomiting. She denies fever, vaginal bleeding, discharge, dysuria or change in bowel habits. She has no past medical history, is a social alcohol drinker, and does not use tobacco products.

On exam she is clearly in distress, clutching her right lower abdomen. Vital signs reveal BP 145/90, HR 110, RR 21, Tmax 98.9 SpO2 99%RA. She is slightly obese but is otherwise well-appearing. She is mildly tachycardic with intact distal pulses and has clear equal breath sounds. Her abdomen exhibits tenderness and guarding to the right lower quadrant, normal bowel sounds and no organomegaly. A pelvic exam demonstrates right adnexal fullness and significant pain on exam without bleeding or discharge.

Ovarian torsion represents a true gynecological emergency and requires rapid evaluation and management in order to salvage the ovary. Ovarian torsion is an uncommon cause of acute abdominal pain in females, but diagnostic delay can have disastrous results. The ovary, and often the fallopian tube (adnexal torsion), become twisted around their vascular pedicle. The cause of this twisting can be multifactorial. The initial twisting causes obstruction of venous return. This leads to vascular congestion, which causes engorgement and edema. The congestion progresses until arterial flow is compromised, leading to ischemia and infarction. Untreated ovarian torsion can result in complete loss of the ovary, as well as ovarian necrosis and infection.

Ovarian torsion can occur in all ages. The greatest percentage of cases occur in the reproductive years but torsion also occurs in children and post-menopausal females. It is more commonly seen in the right ovary due to an increased length of the utero-ovarian ligament on the right and the presence of the sigmoid colon on the left.

The greatest risk factor for ovarian torsion is ovarian enlargement, typically caused by an ovarian cyst or mass. Torsion is more common in an ovary that is greater than 5.0 cm in diameter (86 to 95% per multiple case studies.)  The risk goes down when the size of the ovary becomes more massive (> 20.0 cm) due to decreased motility. It is less common with malignant masses, likely due to adhesions. In reproductive age females the increase in ovarian size is most commonly due to follicular cysts or corpus luteum cysts. Other risk factors resulting in ovarian enlargement include patients with polycystic ovarian syndrome and those undergoing fertility treatment (ovarian hyperstimulation syndrome.) Pregnancy also results in an increased risk of torsion due to an enlarged corpus luteum.

Ovarian torsion does occur in normal ovaries. Pediatric patients with torsion are more likely to have a normal ovary and their increased risk is thought to be due to an elongated utero-ovarian ligament.

Initial actions are similar to the evaluation of other patients in the ED. Establishing IV access and administering antiemetics and pain medication may aid in evaluation of the patient. Rapid urine or serum pregnancy testing should be obtained. A positive pregnancy test does not eliminate the diagnosis of ovarian torsion, especially early in pregnancy, as a corpus luteum cyst may be the source of torsion.

Physical exam should include an abdominal exam and a pelvic exam, including a bimanual exam, to assess for adnexal tenderness and fullness that may be present. It will also evaluate for the presence of concurrent infection. The best initial imaging for ovarian torsion is a transvaginal ultrasound with Doppler. Consult gynecology early if you have a high suspicion for torsion.

The classic presentation of adnexal torsion is sudden onset of unilateral lower abdominal pain which is often described as a stabbing pain and is commonly accompanied by nausea and vomiting. The pain may radiate to the groin. It is important to remember that approximately 40% of patients will report gradual pain instead of the acute onset pain that is frequently associated with torsion and some patients may describe back or flank pain. Some patients will describe several episodes of pain over the course of hours, days, or even weeks, if the ovary has been torsing intermittently. A history of prior ovarian cyst or mass, prior ovarian torsion, or current pregnancy should increase your suspicion for torsion. Fever is uncommon, and usually low-grade if present.

Ovarian torsion should also be considered in infants and small children with feeding intolerance, abdominal distension, vomiting, irritability, and/or a palpable pelvic mass.

Physical examination may reveal pelvic or lower abdominal tenderness. Peritoneal signs are concerning for ovarian necrosis.  On pelvic exam, the patient may have adnexal tenderness or an adnexal mass.

Diagnostic testing is essential when evaluating a patient with suspected ovarian torsion. The most dangerous condition in the differential for adnexal torsion is an ectopic pregnancy, and as such, a pregnancy test should be ordered to help screen for it.

There are no laboratory tests to establish the diagnosis of adnexal torsion. A complete blood count, basic metabolic panel, and urinalysis can provide additional information pointing you toward an alternative diagnosis. A urinalysis may reveal blood consistent with nephrolithiasis, or it may show nitrites and leukocyte esterase more consistent with a urinary tract infection. A markedly elevated serum white blood cell count may favor tubo-ovarian abscess over torsion.

Ultrasound is the diagnostic modality of choice for detecting torsion. The absence of blood flow within the ovary on Doppler exam is a highly specific finding but the presence of Doppler flow does not exclude the diagnosis of torsion.  The ovary has a dual blood supply (ovarian artery and uterine artery) so even if the supply is cut off to one there still may be Doppler blood flow to the ovary. Some studies have shown as high as 60% of cases of surgically verified ovarian torsion will have arterial blood flow on ultrasound. Image 1 demonstrates a side by side comparison. The right ovary has no Doppler flow while the left maintains flow. The most common ultrasound finding in torsion is enlargement or edema of the ovary. Commonly an ovarian mass or cyst can be visualized and in, later stages, free pelvic fluid (indicating hemorrhage) can be seen. 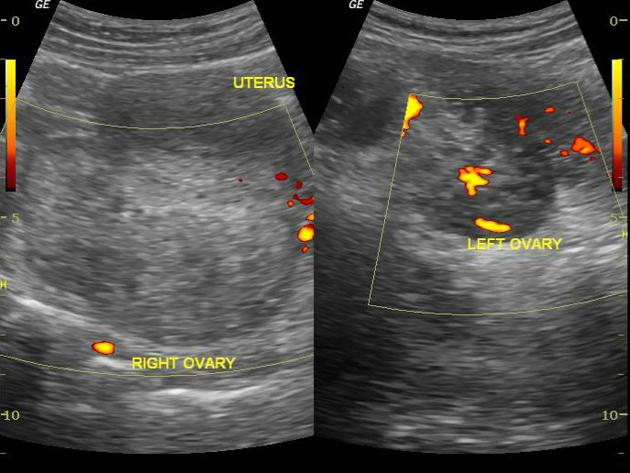 CT in ovarian torsion is nonspecific, with the most common finding being an enlarged ovary or ovarian mass. Other signs on CT include asymmetric adnexal enhancement, thickened fallopian tube, associated free fluid/hemorrhage, and deviation of the uterus to the affected side. CT may, however, be helpful ruling in or ruling out appendicitis or kidney stone as an alternate diagnosis. MRI findings are similar to those on CT, but  MRI is not commonly ordered from the ED.

The diagnosis of ovarian torsion is made definitively in the operating room. Listen for key features on history: sudden onset of unilateral pelvic pain, sometimes radiating to the groin, often associated with nausea and vomiting. Look for corroborating evidence on pelvic exam: adnexal tenderness on the same side as the pain and, less commonly, an adnexal mass. Purulent cervical discharge and cervical motion tenderness point towards PID with a tubo-ovarian abscess.

The most common finding in adnexal torsion on both ultrasound and CT is simply enlargement of the ovary in question. Absence of Doppler blood flow is a helpful finding (high specificity), but this finding has a low sensitivity for detecting torsion. The remainder of findings on ultrasound and CT are nonspecific. However, either ultrasound or CT may help you find other pathology to explain a patient’s pain (eg, kidney stone, appendicitis).

The bottom line – there is no single finding that can definitively “rule in” or “rule out” ovarian torsion. If all your tests are negative, but you still suspect it, call your gynecologist to discuss taking the patient to the OR for laparoscopy.

As with any emergency department patient, start with a primary assessment: airway, breathing, circulation. Anyone with a suspected torsion should have an intravenous (IV) line placed. Treat pain and nausea with IV medications as soon as you have IV access – there is no need to wait for the diagnosis. Keep the patient NPO in preparation for the OR.

Treatment of adnexal torsion is surgical. The ovary must be untwisted as soon as possible to restore blood flow. There is no absolute cutoff to ensure viability. Most surgeons will try to salvage any normal ovarian tissue in a premenopausal patient. Even if a dusky, edematous ovary is discovered in the OR, there is often functional recovery if the tissue is not necrotic. There does not appear to be any increase in adverse events after detorsion when compared to salpingo-oophorectomy. If, on surgical examination, the ovarian tissue is obviously necrotic, there is a mass concerning for malignancy, or the patient is postmenopausal, then a salpingo-oophorectomy will likely be performed.

Point of Care urine pregnancy test and urinalysis were negative. A bedside transabdominal ultrasound was obtained to evaluate for possible free abdominal/pelvic fluid. The bedside ultrasound was inconclusive.  A consultative transvaginal ultrasound was obtained which demonstrated a decreased Doppler flow to the right ovary. Gynecology was emergently consulted who recommended proceeding to the OR for laparoscopy. A large fluid filled cyst was located on the right ovary. The surrounding fallopian tube was dusky and ischemic appearing. The cyst was decompressed and the pedicle of the right ovary was detorsed causing return of blood flow. The patient was closed and taken to recovery where she had resolution of her symptoms.