What may begin as a localized superficial cellulitis after a compromise of the epithelium can result in an abscess.  Necrosis and liquefaction occur as cellular debris accumulates, becomes loculated and walled off as a collection of pus beneath the epidermis. Staphylococcus aurues, especially community-acquired methicillin resistant S. aureus (MRSA), is the most common cause of abscesses in the Emergency Department (ED) population. Patients may present to the ED complaining of a “boil” or “spider bite”, but it’s frequently a MRSA abscess. Group A b-hemolytic streptococci most often cause cellulitis without abscess.  Abscesses associated with specific environmental exposures may be caused by organisms such asEikenella or Pasteurella after an animal bite, Vibrio after saltwater exposure and Pseudomonas after whirlpool exposure.  Anaerobic bacteria can contribute to abscesses in perineal or oral regions.  Abscesses in IV drug users most frequently form abscesses containing strep and staph but may also form abscess that contain anaerobic and gram negative bacteria.

Diagnosis of abscess is often made by observation of a tender, erythematous, warm, fluctuant mass on physical examination such as that noted in Figure 1.  Fluctuance can be described as a tense area of skin with a wave-like or boggy feeling upon palpation; this is the pus which has accumulated beneath the epidermis.  Without adequate evacuation of this pus, the infection will continue to to accumulate and can lead to disseminated or systemic infection. 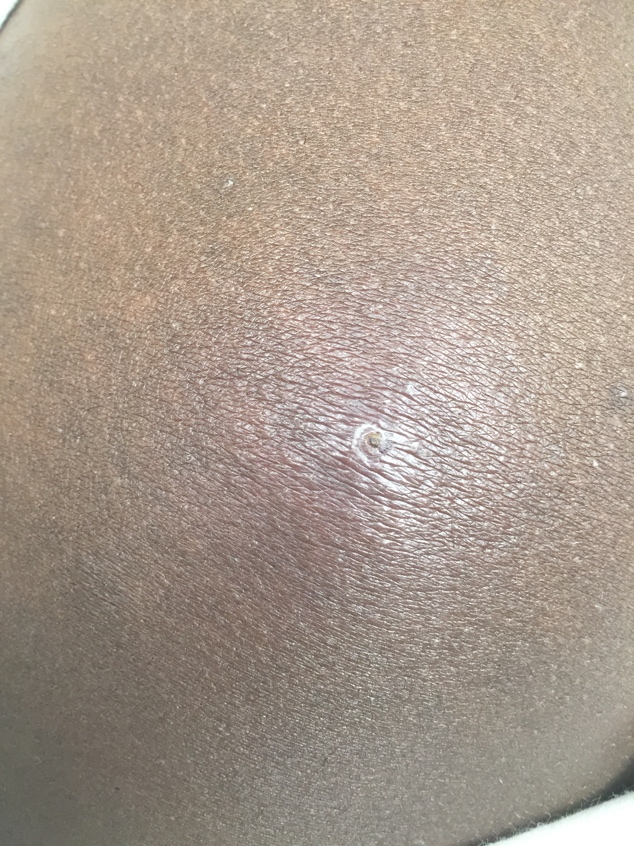 Because there may be surrounding cellulitis, induration can make an abscess less apparent on physical exam.  In these cases, bedside ultrasound can be helpful in differentiating a simple cellulitis from an abscess which requires drainage.  When reviewing ultrasound, areas of cellulitis are hyperechoic with thickened lobules of subcutaneous fat interwoven with hypoechoic strands of fluid; this is referred to as “cobblestoning.” (Figure 2)  In contrast, abscesses have a more well defined collection of anechoic fluid sometimes containing loculations and whirling debris. (Figure 3) There may be overlying findings of cellulitis or a hyperechoic rim. 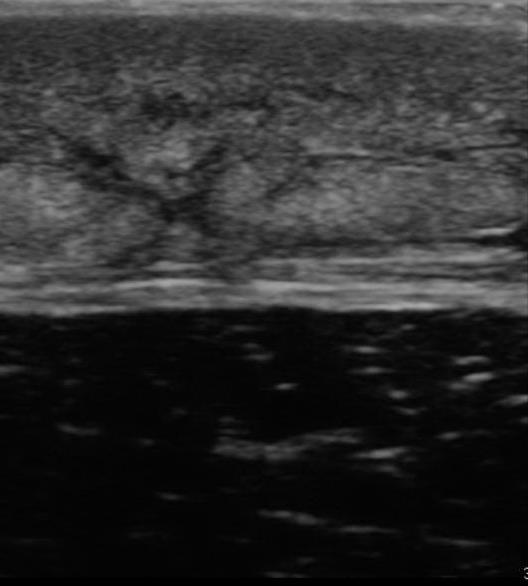 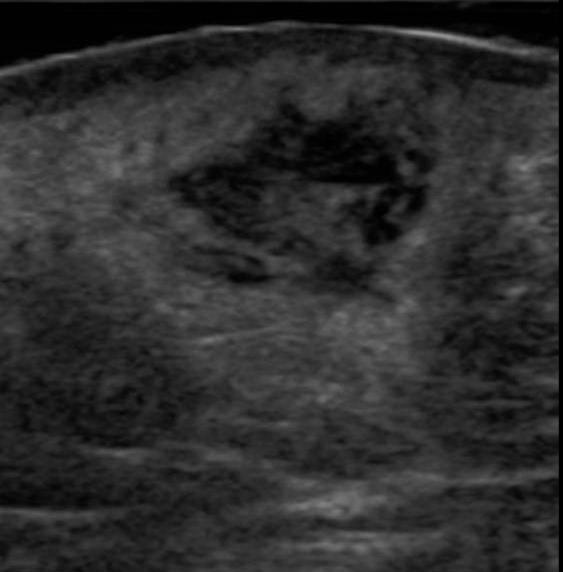 If there is a localized area of induration but no fluctuance on exam or fluid collection on ultrasound, home care with application of heat via warm compresses or soaks along with antibiotics may be attempted.  However, it may be the very early development of an abscess which will be ready to drain within 24-36 hours, so these patients should be well educated on the signs of abscesses and reasons to return to the ER for re-evaluation.

There are few contraindications to this procedure, however, certain situations should prompt consideration of consultation of general or specialty surgical services: large or complex abscesses, those in sensitive areas (face, hand, breast, genitalia) or in regions in close proximity to structures such as blood vessels.  Abscesses that do not resolve despite repeated adequate drainage should prompt consideration of a retained foreign body, underlying osteomyelitis or septic arthritis, unusual organisms such as fungi or mycobacteria, or immunodeficiency of the patient (i.e.: uncontrolled or undiagnosed diabetic).

Occasionally, needle aspiration may be attempted by the Emergency Physician or subspecialist with a smaller abscess in these situations.  However, the success rate of needle aspiration is lower for multiple reasons: the inability to aspirate pus does not necessarily mean there is no purulence to be drained and some will later require repeat drainage (either again by needle or later by I&D.)

Prepare the skin by cleaning with either alcohol swabs, betadine or chloraprep.  Clean gloves and sterile equipment should be used, though this is a procedure that is impossible for sterility to be maintained (given the draining of infected contents.)

Achieving adequate anesthesia of abscesses can be challenging, as even the best technique will prevent the sensation of sharp but not the tension and pressure of breaking up adhesions.  Parenteral or oral analgesics should be given in the ED.  Depending on the abscess size and location, as well as the patient’s individual characteristics and preferences, procedural sedation may be necessary.

Make a linear incision across the diameter of the fluctuant area, ensuring appropriate depth to have reached the cavity of purulence as in Figure 4 and 5.  It’s also important to ensure the length of the incision will allow adequate drainage and room to use hemostats; this is typically between 2/3rd to the full length of the diameter of the fluctuant area.  After initial drainage of purulence, probe the incision with hemostats, opening them up at varying angles in multiple different directions within the cavity to break up all loculations. 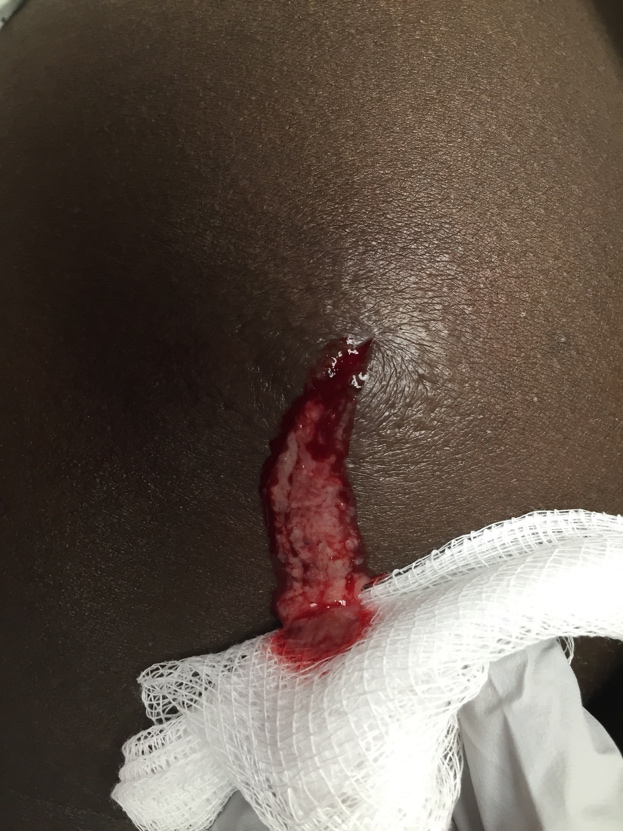 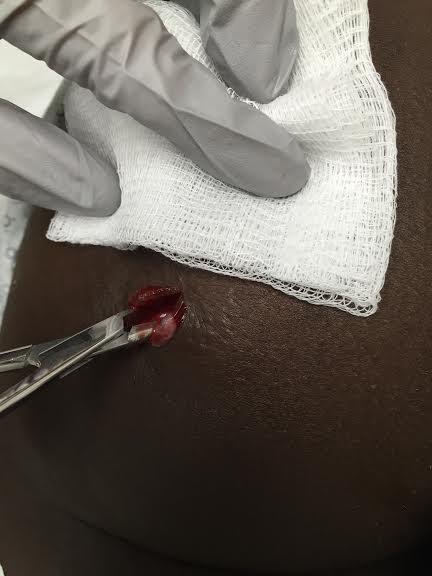 Figure 4 and 5: Incision, drainage and use of hemostats to break up loculations

Normal saline is often used via a syringe (which may have an attached angiocatheter or splash-shield) to irrigate the cavity, though current evidence makes this is of questionable benefit.

It is also optional to pack the wound, as this can be a source of increased discomfort for the patient and appears to be of limited utility in the current literature.  However, some emergency physicians still opt to pack larger abscess cavities with the intent of allowing adequate drainage by preventing premature closure in the days following I&D.  Thin, continuous, plain or iodoform gauze should be placed gently into the cavity with 2 cm extruding and taped to the skin.  It should not be packed tightly as this increases pain for the patient and is not necessary.  The wound can then be covered with a dressing.

For many abscesses, the initial I&D is curative.

However, antibiotics are recommended for cutaneous abscesses (in addition to I&D) by the Infectious Disease Society of America in the following instances:

In those cases in which antibiotic therapy is initiated, coverage should be directed at MRSA with antibiotics such as oral trimethroprim-sulfamethoxazole, doxycycline or clindamycin.  It’s important to be aware of local resistance patterns as community-acquired MRSA resistance to commonly used antibiotics, such as clindamycin, has increased in some regions.

At home, patients may change their dressing as needed.  They should soak the area in warm water or with warm compresses to encourage evacuation of all purulence.  Pain should be treated at home with analgesics such as acetaminophen and ibuprofen.  Patients who had packing placed may be taught how to replace the packing as indicated.  Occasionally, there may be residual purulence requiring further drainage and/or packing replacement.  For this reason, a follow-up recheck visit in 1-3 days is recommended.  The patient should be instructed to return to the ER sooner for worsening pain, swelling, erythema or for signs of systemic illness such as a fever, vomiting and myalgias.

Abscess I&D is a relatively simple procedure commonly performed in the ED.  It is often curative and antibiotics are rarely indicated.  Patients should be instructed on home care and the importance of a recheck in approximately 2 days.