Rapid recognition of a ST elevation MI (STEMI) on electrocardiogram is of paramount importance in the emergency department. In general, high risk patients with chest pain should receive an EKG within 5-10 minutes of presenting to the ED.  Treatment for a STEMI is medical therapy followed by rapid revascularization: “Time equals muscle!”  Overall, the quicker a patient undergoes revascularization in general the better outcome they will have. Identifying this condition on EKG then activating a STEMI protocol will get the patient to the cardiac catheterization lab as early as possible for emergency PTCA or stenting.

Upon completion of this module you should be able to:

What is a STEMI?

In order to diagnose a STEMI, one must first be able to identify the ST segment on the EKG. The ST segment is isoelectric and represents the interval between ventricular repolarization and depolarization. It begins at the J-point and should be isoelectric to the TP and PR segments. Classically, STEMI is diagnosed if there is >1-2mm of ST elevation in two contiguous leads on the ECG or new LBBB with a clinical picture consistent with ischemic chest pain. Classically the ST elevations are described as “tombstone” and concave or “upwards” in appearance.  However, other morphologies such as convex or straight elevations might be seen. 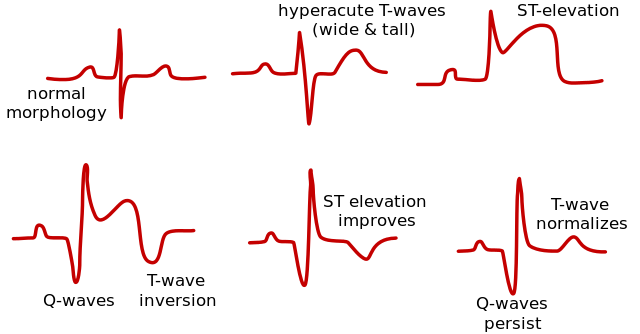 The most serious cause of ST elevations on ECG is a ST elevation MI, however there are other possible etiologies. As usual always consider the “worst first”.  In borderline or atypical cases remember that timely diagnosis of STEMI is imperative versus diagnosing a benign condition such as early repolarization.

STEMI: Most commonly caused by an acute occlusion of a coronary blood vessel secondary to acute plaque rupture and thrombosis. However, cocaine use can also cause a STEMI due to coronary vasospasm, rather than occlusion with thrombosis.

Pericarditis: The hallmark features of pericarditis are diffuse global concave ST elevations with associated PR depressions. Patients with pericarditis will classically have chest pain that is worse with laying back and improved by sitting forward. Pericarditis itself may not cause instability, but an acute and/or large effusion may cause pericardial tamponade.

Left Bundle Branch Block(LBBB): LBBB does signify underlying heart disease but may be new or a chronic change. LBBB is caused by blockage of the left segment of the Bundle of His and causes ventricular depolarization to occur in a right to left direction(as opposed to the normal left to right). This in turn causes QRS prolongation (>120 ms) and an abnormally appearing QRS complex. Leads V1-3 will have deep S waves and V5-6 will have tall R waves. When interpreting an ECG in a patient with LBBB, there will be discordant ST segment changes present (i.e. deep S wave causes ST elevation). Diagnosing a patient with a STEMI in setting of LBBB is challenging and consulting a clinical decision rule (CDR) the Sgarbossa criteria is recommended. In general, one should look for concordant ST changes (i.e. tall R wave with ST elevations). In the past, a new LBBB in a patient with ischemic chest pain was considered to be an indication for a patient to undergo cardiac catheterization.  However, in recent years this has become more controversial with evidence suggesting these patients may be managed more conservatively.

Brugada syndrome: Brugada syndrome is a disease of the myocardial sodium channels which may mimic STEMI on EKG. This condition is important to recognize because it can lead to sudden cardiac death in patients. The classic “Brugada sign” is ST elevation and a partial right bundle branch block in V1 and V2. 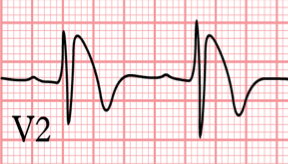 Ventricular Paced Rhythm: A paced rhythm on EKG will appear morphologically similar to LBBB(see above) with discordant ST elevations seen. The one noticeable difference will be the presence of pacer spikes. In general, uou cannot read ischemia in a v-paced rhythm!

Benign Early Repolarization (BER): Benign early repolarization usually represents a normal variant most often seen in young, healthy patients. ST elevations are most prominent in the precordial leads and there is often a “fish hook” or notching at the J-wave in lead V4. The ST changes in early repolarization may be more prominent at slower heart rates and resolve with tachycardia.

Left Ventricular Hypertrophy (LVH): LVH causes a similar pattern of ST elevations as LBBB with ST elevations present in leads with deep S waves(V1-3) and ST depressions or T wave inversions present in leads with tall R waves(I, AVL, V5-6). The ECG changes that are seen are due to thickening of the left ventricular wall leading to prolonged depolarization.

Patients who are experiencing an acute STEMI are classically described as presenting with pressure or crushing chest pain associated with shortness of breath, nausea/vomiting or diaphoresis. The chest pain might be described as radiating into the patient’s neck, left arm or jaw. Oftentimes, they will appear visibly uncomfortable and may have a fist clutching the center of their chest. This classic finding of angina is known as the Levine sign. It is important to remember as noted in “The Approach to Chest Pain” module that many patients with a STEMI or acute coronary syndrome (ACS) including: elderly, diabetic and female patients may present more typically with an anginal equivalents such as nausea and vomiting, fatigue, and/or shortness of breath.  For all patients presenting to the emergency department with chest pain or other symptoms concerning for ischemia an EKG should be performed rapidly after triage to determine if ST elevations consistent with a STEMI are present. If seen an aspirin should be given and s STEMI protocol should be activated. “Time is muscle!” The majority of STEMI patients will undergo emergent catheterization and attempted revascularization. In some cases when a catheterization lab is not immediately available (transfer time of over 90 minutes) or per patient/family decision a thrombolytic such as tPA may be given.

Evaluating the EKG accurately for a patient presenting with a STEMI is an important skill to learn. The leads on the EKG are divided into different regional distributions of the heart that in turn reflect a certain coronary artery. Reciprocal changes or ST depressions may be seen in a different regional distribution on the EKG and support the diagnosis of a STEMI. When discussing the case with the interventional cardiologist they will want to know what region is experiencing ischemia and if there are any other changes present on the EKG such as reciprocal changes, arrhythmia, or in IMI right ventricular extension. 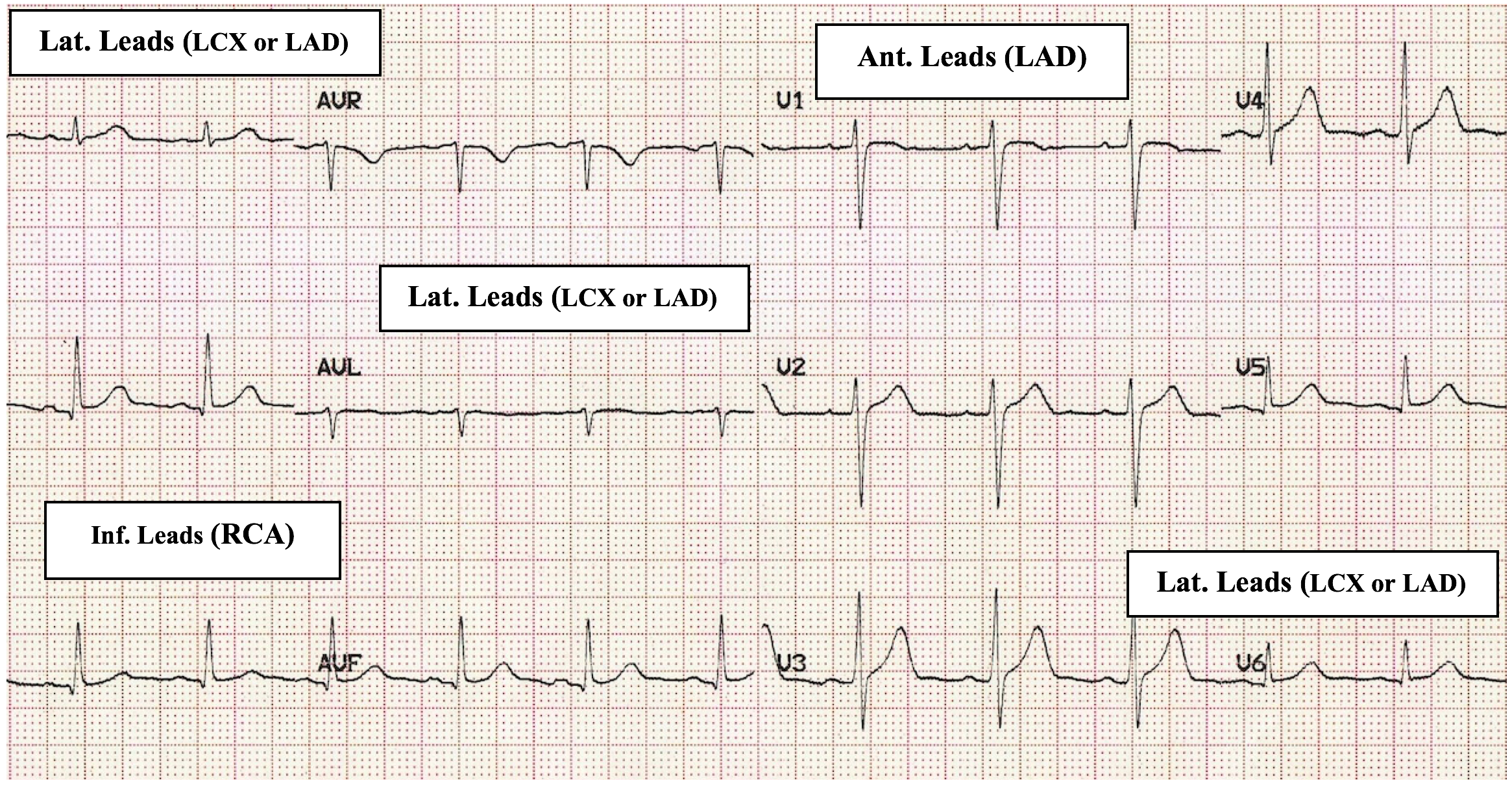 Inferior STEMI: Leads II, III and aVF represent the inferior portion of the heart that is most commonly perfused by the right coronary artery (RCA). Reciprocal ST depressions will be seen in aVL and possibly lead I. Inferior myocardial infarctions are common and represent 40-50% of myocardial infarctions. However, this subgroup of STEMI patients has relatively low in-hospital mortality when compared with other patients who experience MI.

Right Ventricular Infarct: There is a subset of IMI patients who will be experiencing extension of their infarct into the right ventricle. These patients’s blood pressure is severely preload dependent and they may present with hypotension. It is for this reason that nitroglycerin should be avoided in patients who are presenting with an inferior STEMI. RV infarct is suggested if ST elevations are also seen in V1, or if the ST elevations are larger in lead III when compared with II. The diagnosis of RV infarct can be confirmed by doing a right-sided EKG and seeing ST elevation seen in v4R.

Heart Block and Bradycardia: In addition to the ST elevations on EKG one should also look for second or third degree heart block or bradycardia. The AV node is supplied by the right coronary artery (RCA) which makes these arrhythmias more common in patients who are experiencing an inferior STEMI.

Anterior STEMI: Anterior STEMI is caused by occlusions in the left anterior descending artery (LAD). This area is represented by ST segment elevation in the pre-cordial leads V1-V6 as well as the lateral leads I and aVL. Reciprocal changes presents as ST depressions seen in III and aVF. Anterior myocardial infarctions are generally associated with the worst outcomes due to involvement of a large amount of muscle within the heart. In general, patients with anterior MI have higher rates of heart failure, ventricular ectopy (Vfib/VTach) in-hospital, and overall mortality when compared with patients with inferior MI.

Lateral STEMI: The lateral wall of the LV is supplied by branches of the LAD and left circumflex (LCx) arteries. Infarction of the lateral wall often occurs as extension of another territory (i.e. anterolateral MI). Lateral extension can indicate a larger area of tissue involvement and a consequently worse prognosis. The lateral leads are V4-6, I and aVL with reciprocal ST depressions present in III and aVF.

There are three broad categories of lateral infarction:

Wellen’s syndrome: Wellen’s  syndrome is a pattern of deeply inverted or biphasic T-waves in V2-V3. Although this is not a true STEMI, this pattern is highly suggestive of critical stenosis of the LAD. It is important to recognize this finding as these individuals are at increased risk for a large anterior wall MI in the next few days or weeks.