43-year-old female with history significant for exploratory laparotomy with splenic resection 10 years prior presents with two days of abdominal pain with vomiting. She had two episodes of non-bloody diarrhea three days ago, and has not had a bowel movement in the past two days. She reports passing no flatus during this time. Yesterday, she began having non-bloody emesis, and today, she cannot tolerate any oral intake. On examination, you find an uncomfortable woman who is tachycardic and has a distended abdomen, diffusely tender to palpation without rebound tenderness or guarding.

Upon completion of this self-study module, you should be able to:

Bowel obstruction should be considered as a potential surgical emergency when a patient presents with acute abdominal pain. It occurs when the normal flow of intestinal contents is interrupted. The most common causes are adhesions, followed by tumors and hernias. Other causes include strictures, intussusception, volvulus, Crohn Disease, foreign bodies, and gallstones. Obstruction is classified as small bowel obstruction (SBO) or large bowel obstruction (LBO) based on the level of obstruction. LBO is more commonly caused by malignancy and will not be discussed in detail in this module.

SBO begins when the normal luminal flow of intestinal contents is interrupted and the small intestine proximal to the obstruction dilates. Secretions are prevented from passing distally in a complete SBO. As time progresses, the distension leads to nausea and vomiting and inability to tolerate oral intake. Bacteria may ferment in the proximal intestine and cause feculent emesis. The bowel wall becomes more and more edematous as the process continues and leads to a transudative loss of fluid into the peritoneal cavity. This increases the degree of dehydration and electrolyte abnormalities that are present in these patients. Decreased urine output, tachycardia, azotemia, and hypotension can also be seen.

Bowel obstructions can be defined as partial or complete and simple or strangulated. Partial obstruction is when gas or liquid stool can pass through the point of narrowing, and complete obstruction is when no substance can pass. Partial obstruction is further characterized as high grade or low grade according to the severity of the narrowing, and is often managed conservatively. Complete bowel obstruction has a higher failure rate with conservative therapy, and usually requires operative intervention. Strangulation is the most severe complication of small bowel obstruction and is a surgical emergency. This occurs when bowel wall edema compromises perfusion to the intestine and necrosis ensues. This will eventually lead to perforation, peritonitis and death if not intervened upon.

As with all patients, initial concern is for immediate life threats. Assess the airway, determining if copious emesis is causing potential for aspiration. A patient with emesis who is not mentating well may require intubation for airway protection. Vomiting may be controlled with antiemetics and/or nasogastric tube placement. Next, assess the patient’s breathing, applying supplemental oxygen as necessary. In the patient who appears acutely ill with changes in hemodynamics such as tachycardia or hypotension, obtain bilateral intravenous access and administer a bolus of crystalloid fluids as you complete your evaluation.

The patient with a small bowel obstruction will usually present with abdominal pain, abdominal distension, vomiting, and inability to pass flatus. In a proximal obstruction, nausea and vomiting are more prevalent. Pain is frequently described as crampy and intermittent with a simple obstruction. If the pain becomes more severe, it may indicate the development of strangulation or ischemia. Patients also may complain of diarrhea early in the course of bowel obstruction, with the inability to pass flatus and obstipation occurring after the distal portion of the bowel has emptied (up to 12-24 hours).

Physical examination findings include abdominal distension (more prevalent in distal obstructions), hyperactive bowel sounds (early), or hypoactive bowel sounds (late). Fever, tachycardia and peritoneal signs may be associated with strangulation. It is also important to look for possible causes of obstruction such as inguinal hernias, so always include a genitourinary examination. Rectal examination is important as well, because gross blood or hemoccult positive stool may suggest strangulation or malignancy.

Plain radiographs present a convenient diagnostic modality due to low cost and availability. However, these studies are limited by low sensitivity (only 66-85%). In a patient with a concerning abdominal exam, it is reasonable to obtain an upright chest film looking for evidence of perforation suggested by free air (requiring immediate surgical consultation) followed by upright/supine abdominal radiographs.

Computerized tomography has been replacing the small bowel series as the study of choice to differentiate partial versus complete obstruction, to determine the site and cause of obstruction, as well as to identify strangulation early. CT is both sensitive (over 96%) and specific (up to 100%) at diagnosing SBO.

Obstruction is present if the small bowel loop is dilated greater than 2.5 cm in diameter proximal to a distinct transition zone of collapsed bowel less than 1 cm in diameter. A smooth beak indicates simple obstruction without vascular compromise; a serrated beak may indicate strangulation. Bowel wall thickening, pneumatosis, and portal venous gas all suggest strangulation.

CT can also differentiate between the etiologies of SBO; that is, extrinsic causes such as adhesions and hernia from intrinsic causes such as neoplasms or Crohn disease. Furthermore, it has the ability to identify a myriad of other causes of acute abdominal pain such as abscess, hernia, tumor, or inflammation.

When complete bowel obstruction is suspected, oral contrast is often not necessary, and administration may cause excess discomfort for the patient in addition to delays in diagnosis. For patients in which there is a concern for partial SBO, oral contrast may help with diagnosis and can also be therapeutic. Images with intravenous contrast may be added to unenhanced CT to help delineate alternative diagnoses and better demonstrate bowel ischemia if present. 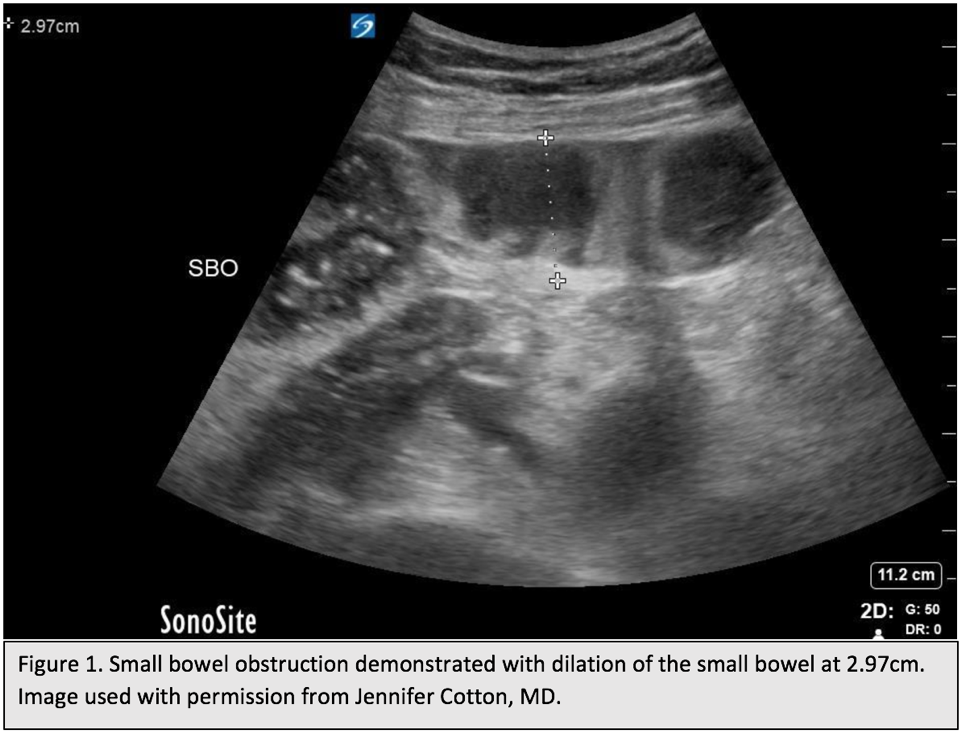 In the hands of a skilled operator, point-of-care ultrasound (POCUS) may be used at the bedside to quickly diagnose SBO while avoiding radiation exposure. Sensitivity ranges from 84-97.7% with 84-100% specificity.

Findings indicating SBO include dilated loops of small bowel (>2.5cm) and whirling or to-and-fro movement of intraluminal contents in the small bowel. Visualization of free fluid between dilated loops of bowel, lack of peristalsis, and bowel wall thickening >3mm suggests the presence SBO complicated by bowel ischemia. As with plain radiographs, normal findings on POCUS do not rule out SBO, and further imaging may be necessary.

FOAMed resources for learning more about POCUS for SBO:

If the patient is acutely ill and/or has peritoneal signs, an emergent surgical consult and aggressive resuscitation should ensue. Crystalloid replacement should start with 2 liters of crystalloid wide open with standard oxygen and monitoring per protocol. If surgical intervention is acutely needed, prophylactic antibiotics may be given.

In the stable patient in whom the diagnosis of SBO is made, it is important to consult with surgery to determine if operative management is warranted. If the patient’s exam or CT scan suggests strangulation (peritonitis, thickened bowel wall, etc.) then operative intervention should ensue. If there are no signs of impending strangulation, then a trial of non-operative management may be appropriate.

Non-operative management consists of GI decompression with a nasogastric tube, intravenous fluid hydration, bowel rest, enteral water-soluble contrast administration, and symptomatic treatment. Frequent reassessment is important to make sure that the patient is not developing signs of strangulation. Intravenous medications for pain control and nausea should be given as needed. The patient should be admitted for observation and serial abdominal examinations. If no improvement is shown, operative management should ensue.

In the patient from the beginning of the chapter, bilateral intravenous access was obtained and a fluid bolus was administered with improvement in tachycardia. Labs were significant for a hypokalemic, hypochloremic metabolic alkalosis, and potassium was repleted. Bedside ultrasound demonstrated fluid-filled loops of small bowel dilated to 2.9 cm with intraluminal hyperechoic material moving back and forth repeatedly. Nasogastric tube was placed and the patient received intravenous maintenance fluids and analgesics. She had no history of SBO and transition point was unclear on ultrasound, so a CT was performed which demonstrated a distal small bowel transition point with evidence of adhesions. She was admitted to the general surgery service, failed conservative management, and was ultimately taken to the operating room, where adhesions were lysed. She had no evidence of strangulated or ischemic bowel, and her post-operative hospital course was unremarkable.