Written By: Lynne Yancey University of Colorado School of Medicine

Ovarian torsion is an uncommon cause of acute abdominal pain in females, but it is a gynecologic emergency - diagnostic delay can result in loss of the ovary. The ovary, and often the fallopian tube as well (adnexal torsion) become twisted around their vascular pedicle. This twisting initially obstructs venous flow, which causes engorgement and edema. The engorgement can progress until arterial flow is compromised, leading to ischemia and infarction. An ovary with a mass or cyst is more prone to twisting by virtue of its asymmetry. It is most common in the reproductive years, but can occur at any age.

The classic presentation of adnexal torsion is sudden onset of unilateral lower abdominal pain which is initially visceral in character (ie, vague and poorly localized) and may be accompanied by nausea and vomiting. It may radiate to the groin or flank. Sometimes the patient will describe several episodes of pain over the course of hours, days, or even weeks, if the ovary has been torsing intermittently. A history of prior ovarian cyst or mass, prior ovarian torsion, or current pregnancy (ie, corpus luteum cyst) should increase your suspicion for torsion. Physical examination may reveal lower abdominal tenderness. On pelvic exam, the patient may have adnexal tenderness or an adnexal mass. Fever is uncommon, and usually low-grade if present.

The most dangerous condition in the differential for adnexal torsion is an ectopic pregnancy. Any female of reproductive age presenting to the emergency department should have a pregnancy test. There are no laboratory tests which are helpful in establishing the diagnosis of adnexal torsion. Some tests may be helpful in pointing you toward an alternative diagnosis. A urinalysis may reveal blood consistent with nephrolithiasis, or it may show nitrites and leukocyte esterase more consistent with a urinary tract infection. A markedly elevated serum white blood cell count may favor tubo-ovarian abscess over torsion. Ultrasound is the diagnostic modality of choice for detecting torsion. The absence of blood flow within the ovary on Doppler exam is a useful finding in establishing the diagnosis. However, it is important to note that the presence of Doppler blood flow does not exclude the diagnosis of torsion. In some studies, over half of patients with surgically proven torsion had arterial blood flow seen on ultrasound. Other common ultrasound findings in torsion include enlargement or edema of the ovary, an ovarian mass or cyst, and free pelvic fluid (indicating hemorrhage). 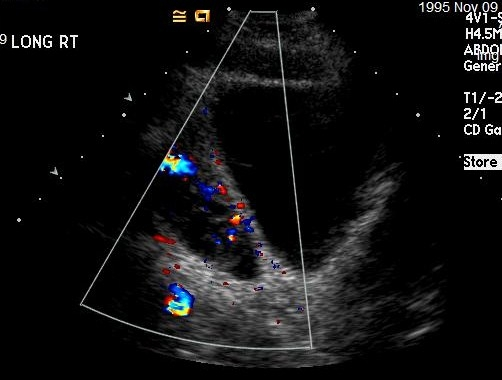 Torsed left ovary, same patient. The ovary is enlarged with a small area of adjacent free fluid which at surgery was found to be hemorrhage from the ischemic ovary.[/c 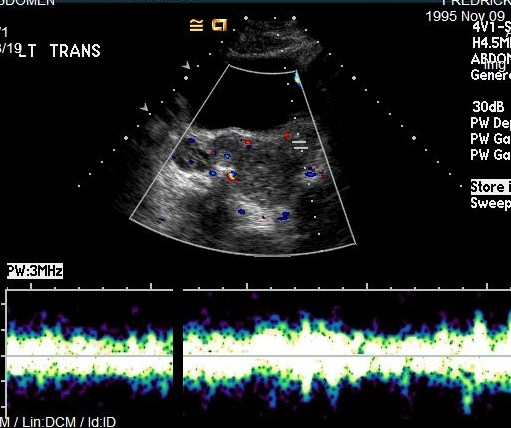 CT in ovarian torsion is nonspecific, with the most common finding being an enlarged ovary or ovarian mass. Other signs on CT include a thickened fallopian tube, associated free fluid/hemorrhage, and deviation of the uterus to the affected side. However, if you are strongly considering appendicitis or kidney stone as an alternate diagnosis, CT may be helpful in ruling in or ruling out these conditions. MRI findings are similar to those on CT; however MRI is not commonly ordered from the ED.

The diagnosis of ovarian torsion is made definitively in the operating room. Listen for key features on history: sudden onset of unilateral pelvic pain, sometimes radiating to the groin, often associated with nausea and vomiting. Look for corroborating evidence on pelvic exam: adnexal tenderness on the same side as the pain and less commonly an adnexal mass. Purulent cervical discharge and cervical motion tenderness point more towards PID with a tubo-ovarian abscess. The most common finding in adnexal torsion on both ultrasound and CT is simply enlargement of the ovary in question. Absence of Doppler blood flow is a helpful finding (high specificity), but this finding has a low sensitivity for detecting torsion. The remainder of findings on ultrasound and CT are nonspecific. However, either ultrasound or CT may help you find other pathology to explain a patient's pain (eg, kidney stone, appendicitis). The bottom line - there is no single finding that can definitively "rule in" or "rule out" ovarian torsion. If all your tests are negative, but you still suspect it, call your gynecologist to discuss taking the patient to the OR for laparoscopy.

As with any emergency department patient, start with a primary assessment: airway, breathing, circulation. Anyone with a suspected torsion should have an intravenous (IV) line placed. Treat pain and nausea with IV medications as soon as you have IV access - there is no need to wait for the diagnosis. Keep the patient NPO in preparation for admission to the OR.

Treatment of adnexal torsion is surgical. The ovary must be untwisted as soon as possible to restore blood flow. While there is no absolute cutoff to ensure viability, some studies have indicated that the best outcomes are achieved if the ovary is detorsed within 8 hours. If on surgical examination the ovarian tissue is obviously necrotic, it may be removed. An ovarian mass or cyst may be resected. Most surgeons will try to salvage any normal ovarian tissue in a premenopausal patient. Unlike orchiopexy for testicular torsion, oophoropexy is still somewhat controversial, although with the current trend toward ovarian salvage more clinicians have advocated this procedure.