68 year-old gentleman with a history of diabetes, hypertension, coronary artery disease and chronic kidney disease presents to the Emergency Department (ED) with generalized weakness, fatigue and lightheadedness following a weeklong illness during which his wife reports he has complained of nausea and had a poor appetite.  The patient states he had a CT scan performed at another hospital and was told that there was “nothing wrong.”

Hyperkalemia is a potentially life-threatening electrolyte abnormality seen frequently in the ED. The most common condition leading to hyperkalemia is missed dialysis in a patient with end stage renal disease (ESRD), but many other conditions can predispose an individual to hyperkalemia.

The etiologies of hyperkalemia can grouped in three categories:

The primary survey should focus on assessing airway, breathing and circulation (ABC). Since many patients with severe hyperkalemia will have renal dysfunction, some may be fluid overloaded and may present with pulmonary edema and respiratory distress.

Traditionally, the electrocardiogram (ECG) has been used as a surrogate marker for clinically significant hyperkalemia. Patients suspected of having hyperkalemia (e.g. chronic renal failure, severe diabetic ketoacidosis, etc.) should be placed on a cardiac monitor and a 12-lead electrocardiogram should be performed immediately. Concurrently, intravenous access should be obtained and a blood sample should be sent to the laboratory for a basic metabolic profile.

The classic presentation of hyperkalemia is typically underwhelming. No signs or symptoms are pathognomonic for this condition, although patients may rarely present with weakness or paresthesias.

It is not uncommon for a patient with mild to moderate hyperkalemia to be identified by an unexpected laboratory abnormality.

Only in severe hyperkalemia do symptoms develop, with cardiovascular, neuromuscular, and gastrointestinal manifestations. One of the most common complaints in patients with severe hyperkalemia is weakness, however this complaint is neither sensitive nor specific for hyperkalemia and will also be seen with numerous other conditions.

With severe hyperkalemia, the most significant effect is on the cardiovascular system with dysrhythmias including 2nd or 3rd degree heart block, wide complex tachycardias, and progression to ventricular fibrillation and asystole. The clinician should have a high index of suspicion for hyperkalemia in patients with chronic renal failure and other predisposing conditions, particularly in the setting of hypotension or shock.

The physical examination of these patients tends to be unremarkable; however, look for extrasystoles, pauses or bradycardia on cardiac exam, decreased deep tendon reflexes or overall decreased strength on neurologic exam.  Also evaluate specifically for evidence of chronic renal failure such as evidence of fluid overload and dialysis access sites.

The ECG is a rapid, non-invasive and highly sensitive screening tool that can be used to evaluate patients suspected of having hyperkalemia.ECG abnormalities reflect the rate of rise of potassium and determine whether a given potassium level will cause cardiac arrest. Tall, peaked T waves are typically the earliest manifestations of hyperkalemia and occur before changes to the QRS complex. In the absence of any other ECG findings, peaked T waves are rarely associated with life-threatening arrhythmias.

Additionally, severe hyperkalemia can manifest with sinus bradycardia or arrest, AV blocks and loss of pacemaker capture.  Impaired conduction in the His-Purkinje system from hyperkalemia and can also occur, causing fascicular and bundle branch blocks. 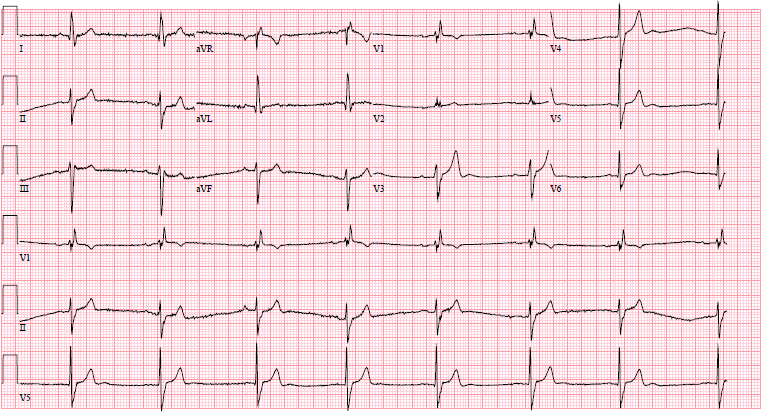 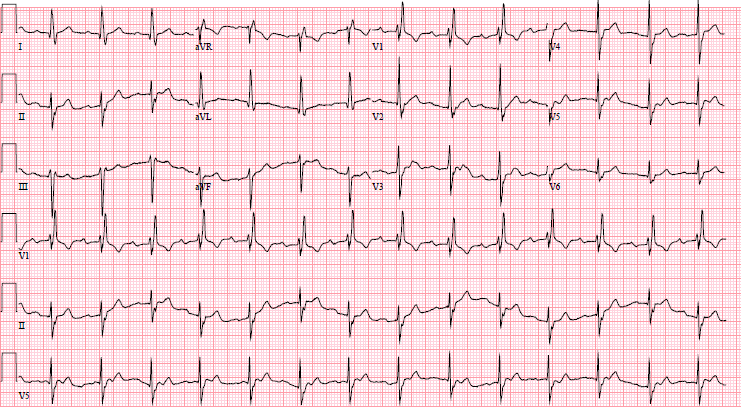 The mnemonic C BIG Potassium go Down is helpful for remembering the critical elements of hyperkalemia management:

G - Glucose (give with insulin)

P - Patiromer (relatively new, may not be available in the ED)

Calcium gluconate or calcium chloride (1 ampule or 1g) IV over 2-5 minutes; the effect is immediate. This dose may be repeated after 5 minutes if no improvement. Onset within minutes, and lasts approximately 30-60 minutes. Calcium chloride has three times more elemental calcium than calcium gluconate.  However, calcium chloride may cause tissue necrosis if extravasation occurs. Therefore, it should only be given through a central line or if the patient has severe hemodynamic compromise or cardiac arrest. Intravenous calcium salts should be used with caution in patients with hyperkalemia and digoxin toxicity. Consider hypertonic saline (10ml of 3%) in this situation.

If there are no cardiac effects or hemodynamic instability, reconfirm the K+ with serum sampling prior to treatment.

The patient’s ECG shows a wide QRS complex and peaked T waves concerning for hyperkalemia.  Appropriate treatment with calcium gluconate, insulin, and dextrose is initiated empirically. The laboratory values show a potassium of 7.1 mEq/L with a serum creatinine of 4.6 mg/dL. Nephrology is consulted for hemodialysis.  The patient is admitted to the hospital and stabilized, and is ultimately discharged home with improved renal function.