Emergency medicine ultrasound combines three traditionally distinct parts: obtaining the relevant ultrasound images, interpreting the images obtained, and applying this information to patient care. By combining these parts which were traditionally done by the US technician, the radiologist and the EM physician respectively, the EM physician can speed the care and disposition of patients in the Emergency Department.  Ultimately having a good working knowledge and the technical skills to obtain US images can improve the care of patients in the ED.

Far beyond the range of normal human hearing (20 Hz to 20,000 Hz), diagnostic ultrasound utilizes sound waves (energy) in the range of 2.5 MHz to 10 MHz transmitted through the tissues of the human body to evaluate for disease processes and aid in therapeutic procedures. The piezoelectric effect is used to create these waves via crystalline material in the transducer probes of the ultrasound machines. The sound waves are produced by a current which is applied to the crystalline material; this produces a vibration creating the ultrasound waves.  The transducer acts as both a speaker and a microphone producing and receiving reflected waves. The ultrasound machine then interprets the returning soundwaves to create an image on the screen that can be interpreted for diagnostic or procedural purposes.

Many factors influence the velocity of ultrasound waves transmitted through the human body including tissue densities and tissue stiffness:

Reflection – reflection occurs at interfaces between tissues of different densities

Attenuation – the diminution, or weakening, of signal energy as it passes through a medium

Many manufacturers offer ultrasound machines (Figure 1), but they all have basic components in common: a transducer which transmit and receive the ultrasound signal, a central processing unit which interprets the signal and a screen which projects the images produced. 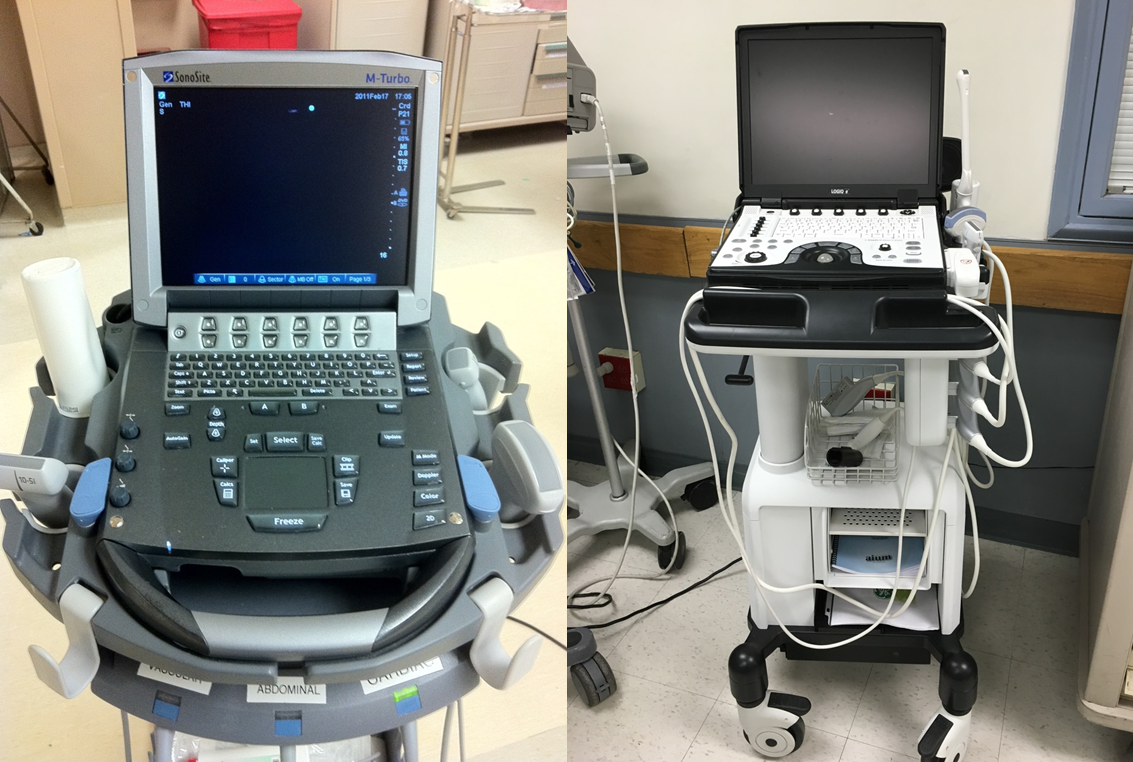 Ultrasound transducers come in many shapes and sizes designed for various applications. Common configurations include curvilinear, linear, phased array and endocavitary transducers, among others.

Curvilinear – A larger curved “footprint” transducer (Figure 2) that is typically used for abdominal, obstetrics and gynecology, and nerve imaging.  Curvilinear transducers transmit ultrasound waves in the range of 1-5 MHz which allows for imaging of deeper structures at the expense of resolution. 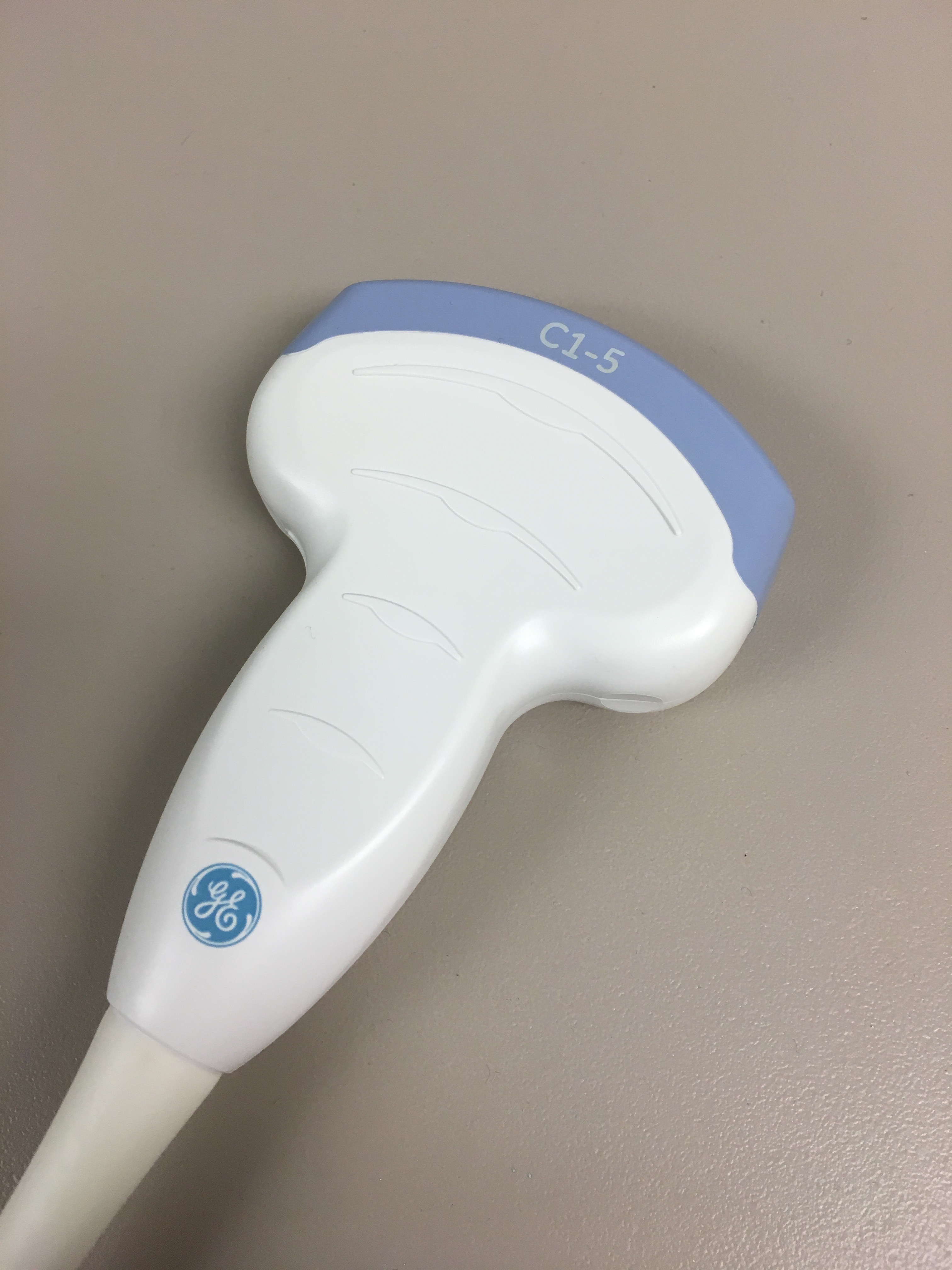 Linear – Linear array transducers (Figure 3) have a flat face and are typically used for vascular, musculoskeletal, nerve, ocular, and small parts imaging. They transmit ultrasound waves in the range of 4-15 MHz allowing for higher resolution imaging of superficial structures. 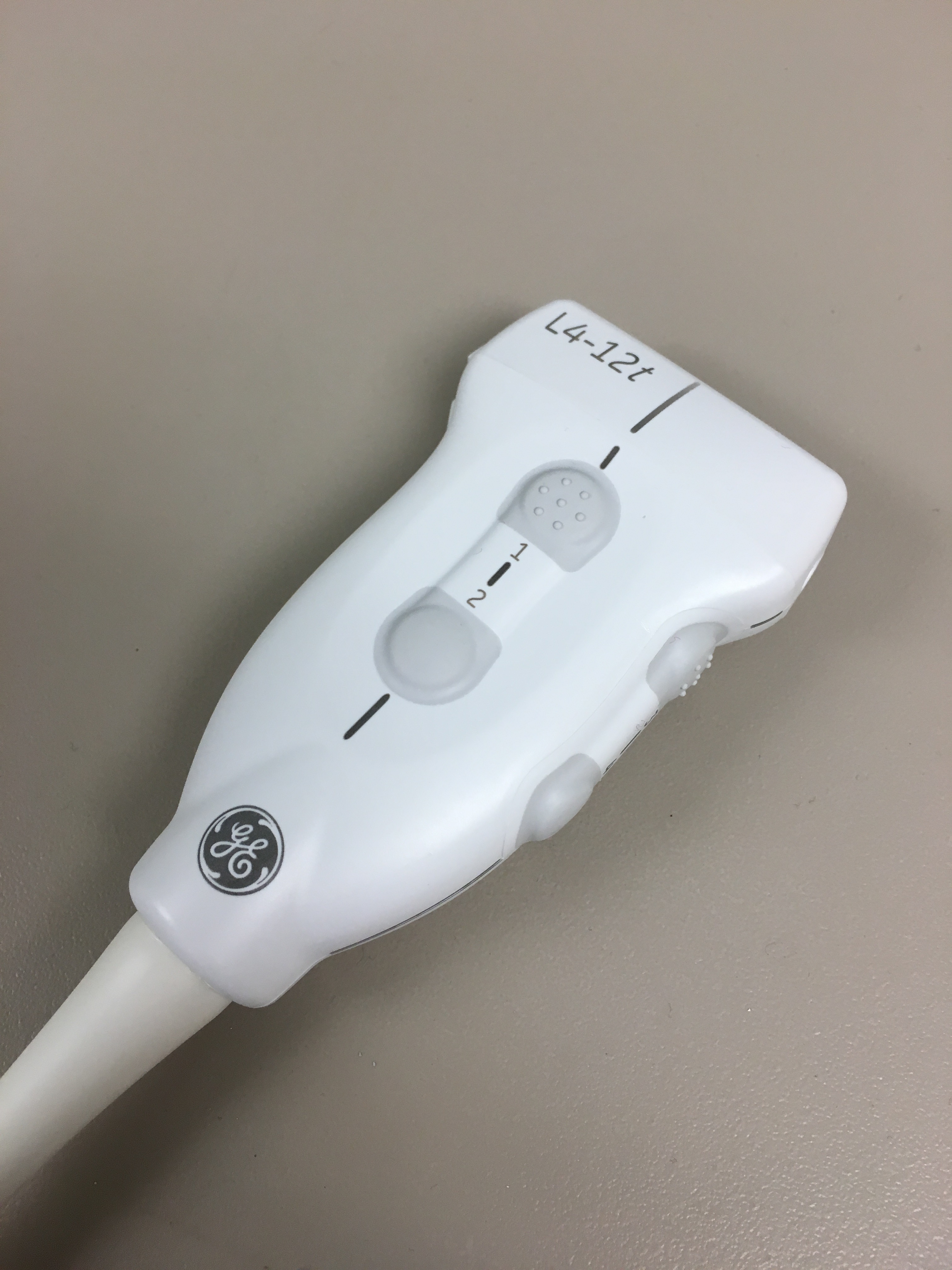 Phased-array/Cardiac – Phased array transducers (Figure 4) have a small flat footprint that facilitates intercostal imaging of the heart, although they can be used for many applications. They have a small superficial field of view which can limit superficial imaging and transmit in the frequency range of 1-5 MHz. 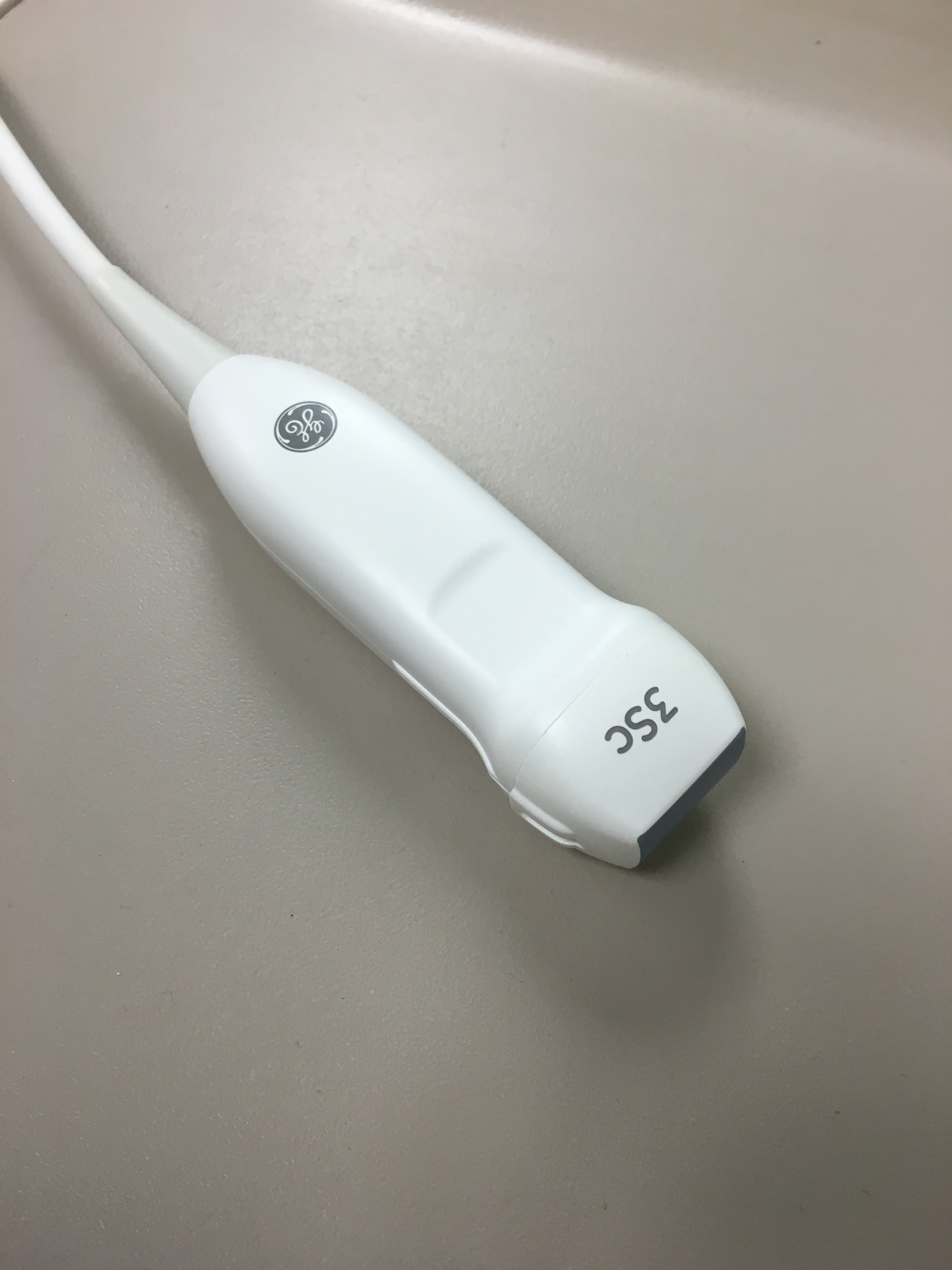 Endocavitary – Endocavitary transducers (Figure 5) are small footprint curved array transducers that can be inserted into an orifice to obtain imaging closer to the structure of interest. They are typically placed endovaginally to obtain gynecologic and obstetric images but are also used to visualize peritonsillar abscesses among other applications and transmit in the frequency of 5-9 MHz.

Various types of probe covers (Figure 6) are available to maintain sterility when performing diagnostic ultrasound, such as endovaginal ultrasound, and ultrasound guided procedures such as central venous catheter placement. 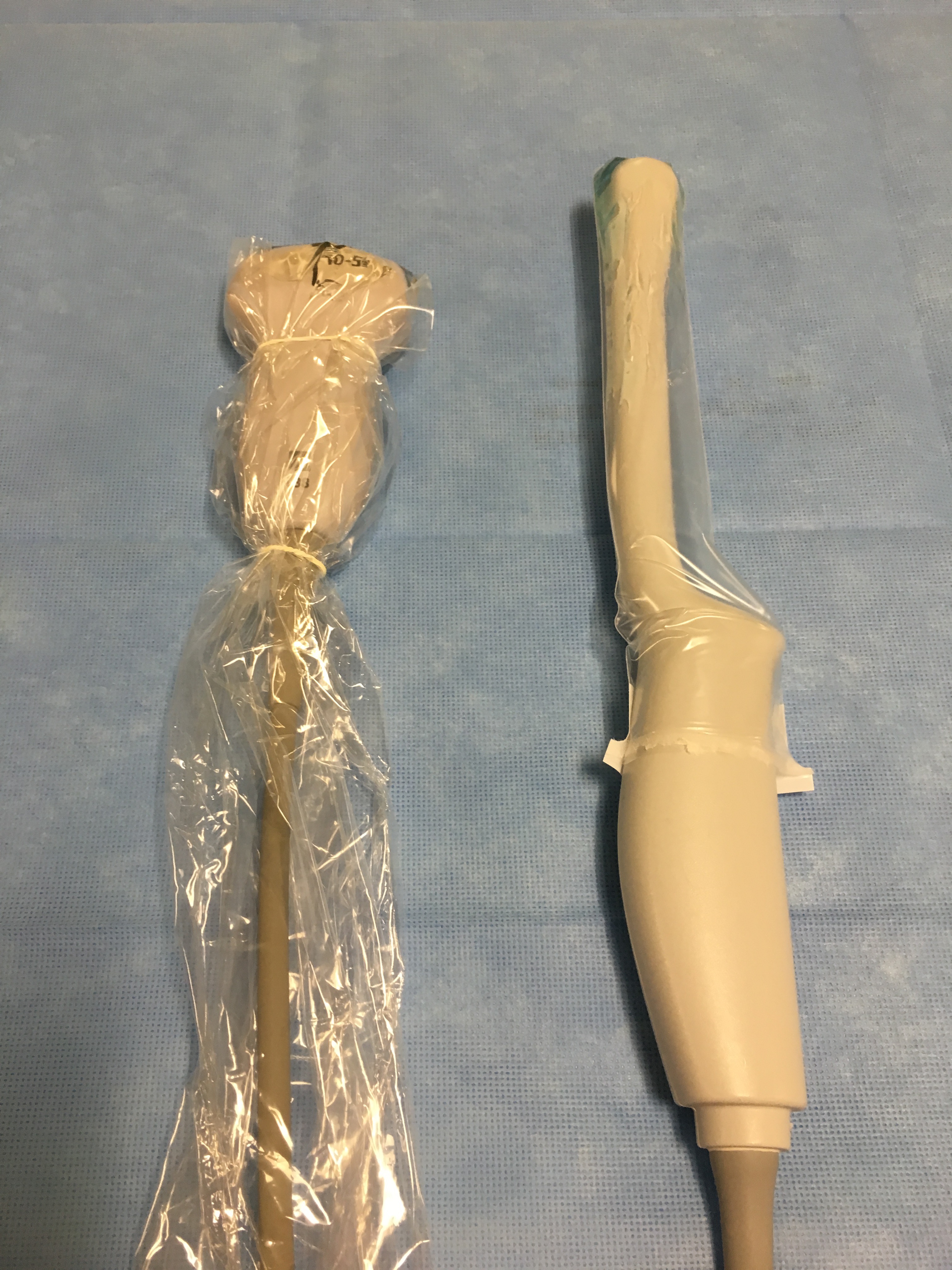 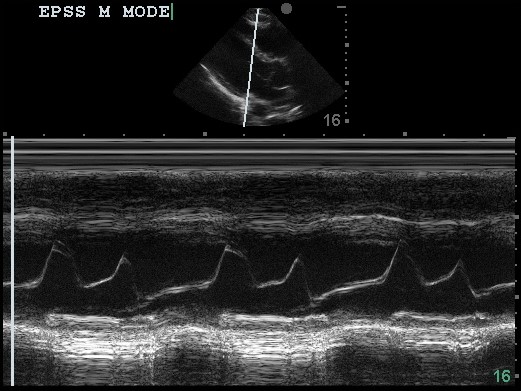 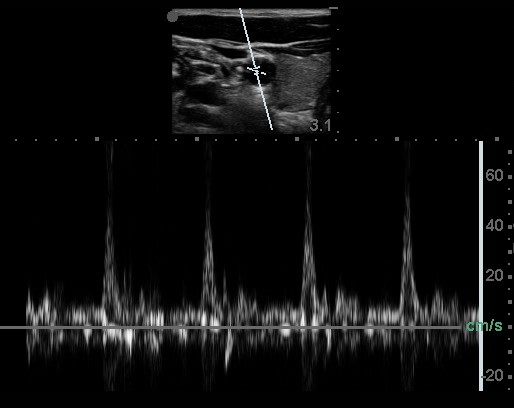 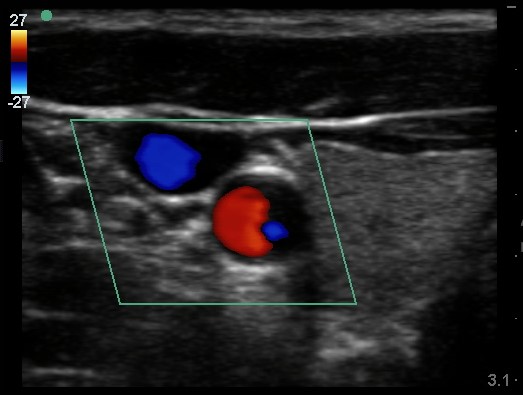 In 2008 the American College of emergency physicians a CEP updated their 2001 recommendations for the use of ultrasound in the emergency department they listed 11 core emergency ultrasound applications.1

The focused assessment with sonography for trauma examination, or FAST examination, is used in the setting of trauma to evaluate for free fluid in the abdominal cavity due to vascular or hollow viscus injury.

The standard views in the FAST examination (Figure 10) include the sub-xiphoid 4 chamber heart  view, a right upper quadrant abdominal view to visualize the interface between the liver and the right kidney (Morison’s pouch),  a left upper quadrant abdominal view to visualize the potential space between the spleen and the left kidney (splenorenal interface), and finally a pelvic view  transverse pelvic view in men and a sagittal view in women to evaluate for free fluid in the pelvis. 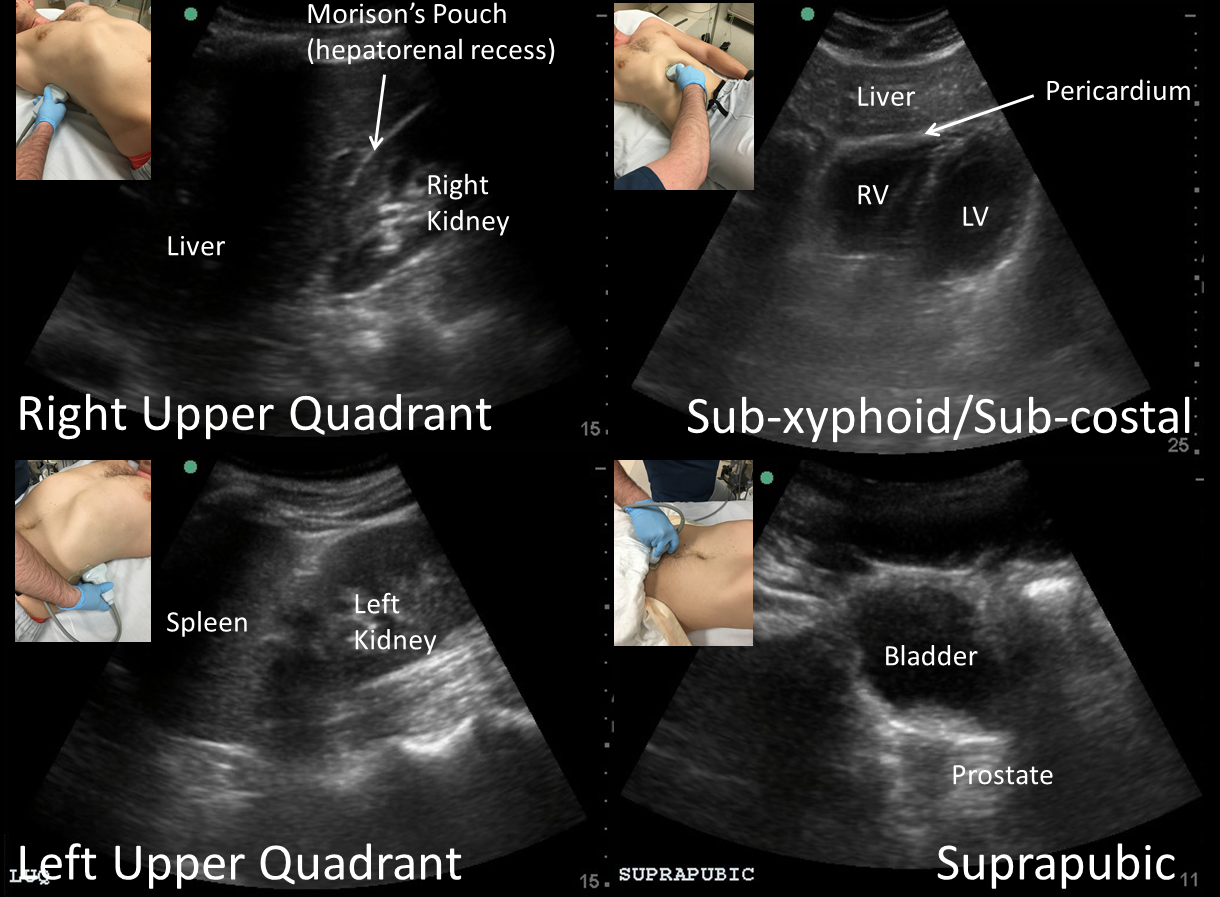 In this video (Video 1) of a FAST exam obtained in a patient with a ruptured spleen free fluid (blood) can be seen in the RUQ, LUQ, and suprapubic views.

Abdominal aortic aneurysm (AAA) is a relatively common finding in patients over 50 years of age and can be evaluated using bedside ultrasound.  Dilation of the abdominal aorta greater than 3 cm indicates an AAA and patients with dilation greater than 5 cm (Figure 11) are at increased risk for spontaneous rupture of the aorta.4  Bedside ultrasound and can speed diagnosis and treatment of patients with suspected ruptured AAA.

Aortic dissection can also be assessed with bedside ultrasound and the finding of an intimal flap (Video 4) is pathognomonic for this emergency disorder of the aorta.

Bedside transthoracic cardiac ultrasound is indicated in patients with significant cardiovascular compromise. It is used to assess overall cardiac function (Video 5) and rapidly identify potentially reversible conditions such as pericardial effusion and tamponade.  Other indications for cardiac ultrasound (among others) include assessment for signs of massive pulmonary embolism, volume status and guidance in placement of cardiac pacing leads.

Biliary pathology including cholelithiasis (Figure 12) causing biliary colic and cholecystitis is commonly found in patients presenting to the emergency department. Bedside ultrasound can be effectively used to evaluate patients for these entities. The primary abnormalities noted in patients with biliary disease include the presence of gallstones or gallbladder sludge, thickened gallbladder wall, pericholecystic fluid, dilated common bile duct and sonographic Murphy’s sign.5

Ureteral jets (Video 8) can also be assessed with bedside ultrasound and may provide additional information as to the degree of ureteral obstruction.

Lower extremity pain and swelling resulting from deep vein thrombosis (DVT) can be readily diagnosed at the bedside with ultrasound.6  The ultrasound transducer is used to compress the venous system of the lower extremity to assess the venous vessels for patency. A non-compressible venous blood vessel indicates the presence of venous thrombus (Video 9).

Multiple applications for ultrasound can be utilized to evaluate the soft tissue for the presence of abscess or cellulitis in the soft tissues. Other musculoskeletal applications include evaluation of ligamentous and tendinous structures such as Achilles tendon rupture. Fractures can also be evaluated with ultrasound.

Common thoracic problems including pneumothorax pleural effusion and pneumonia among other disease entities can be effectively evaluated with ultrasound in the Emergency Department.

In this video (Video 10) the right lung can be seen surrounded by a large right sided pleural effusion. The diaphragm, liver and right kidney can also be seen.

One of the recently added studies to the ACEP 2008 guidelines is ocular ultrasound (Figure 13) which can be used to evaluate for ocular injuries such as foreign body, lens dislocation, as well as vitreous hemorrhage and retinal detachment.1 Additionally ultrasound can be used to evaluate patients with potential increased intracranial pressure by evaluating the optic nerve shadow.

Many medical procedures performed in the Emergency Department such as central venous catheter placement, peritonsillar and cutaneous abscess drainage and trans-venous cardiac pacer lead placement can be facilitated using ultrasound.

Other emerging ultrasound applications discussed in the ACEP 2008 guidelines include advanced echocardiography, transesophageal echocardiography, bowel evaluation (including intussusception, appendicitis, pyloric stenosis, diverticulitis and small bowel obstruction), adnexal pathology, testicular ultrasound, transcranial Doppler, and contrast studies.1  The use of ultrasound in the emergency department continues to evolve in the Emergency Department.